A walk among the walls, the archways, and the towers | Turismo Roma
Skip to main content

A walk among the walls, the archways, and the towers 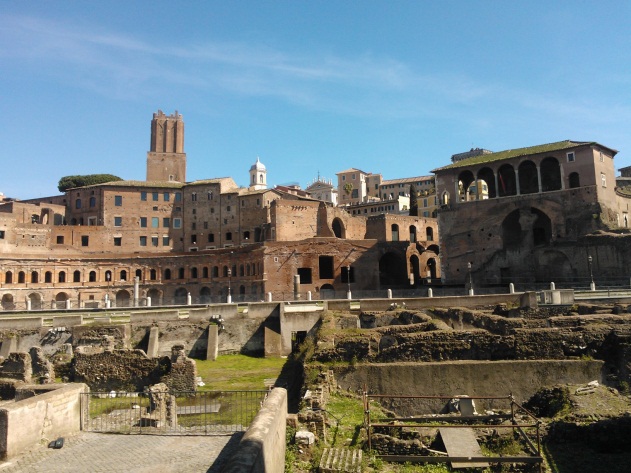 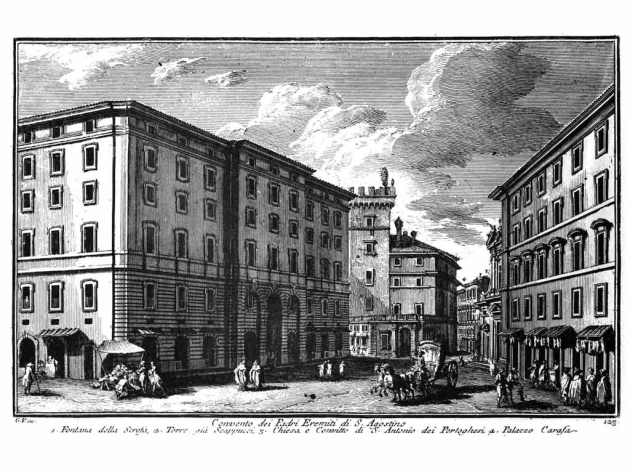 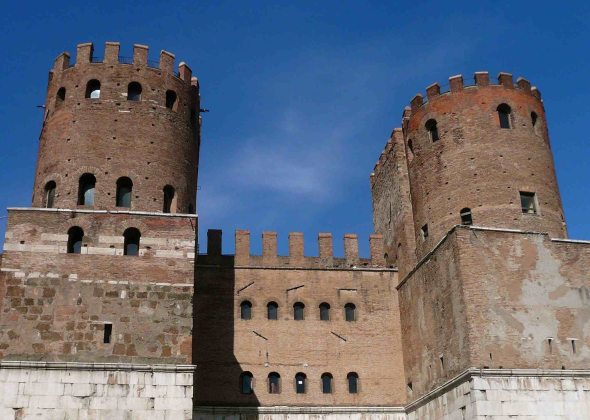 This walking tour offers the most attentive and curious visitors the chance to observe Rome from an unprecedented perspective, discovering details that may go unnoticed but that reveal the true soul of the city and that have helped define the unique profile of today’s Rome. Indeed, imposing arches, towers, gates and ramparts tell the story of the city, sometimes celebrating the glory of the exploits of great men.

The fortifications to defend the city were built over the centuries, from the origins of Rome, in the 8th century BC, until the 17th century AD. The oldest walls, called Romulee, now disappeared, date back to the creation of the city and were limited to the Palatine Hill. The first great city wall of Rome, the Servian Wall, attributed to King Servius Tullius, was built in the 6th century B.C. In the republican era, after the traumatic invasion of Gauls in the 4th century BC, they were rebuilt, and are now known as the Servian Republican walls. Made up of blocks of tuff, they are still well visible for 94 meters, at the Termini Station, where there was the most fortified stretch, at the Campidoglio and in Largo Magnanapoli. The defensive system surrounded the town for about 11 kilometers, enclosing the Quirinale, Viminale, Esquilino, Oppio, Celio, and Aventino hills. Along its perimeter opened ten doors, including the Porta Viminale, the Porta Esquilina, the Porta Querquetulana, where the Basilica of the Santi Quattro Coronati was later built, and the Porta Caelimontana. The Servian Walls were restored by Augustus and then incorporated into structures of the imperial age.

For a long time Roma, mistress of the Mediterranean, had no urban boundary. The need for a new defensive structure was revived in the 3rd century A.D.: the danger of barbarian invasions induced the emperor Lucius Domitius Aurelianus to build a new defensive system. The Aurelian Walls, built between 271 and 275 A.D. extended for about 19 kilometers, almost 6 meters high, and were interspersed, every 30 meters, by square towers and gates. In order to spare time and processing costs, they internally incorporated older buildings, such as sections of aqueducts, the Pyramid of Caius Cestius and the Castro Pretorio. Inside Porta San Sebastiano there is the Museo delle mura (Museum of the Walls), which traces its history and analyzes its construction systems.

The Leonine Walls, dating around the middle of the 9th century, are named after Pope Leo IV who erected them to protect the Vatican from the Saracen raids. During the pontificate of Niccolò III the Corridore di Borgo was added, also known as Passetto, it connects Castel Sant'Angelo, the ancient Mausoleum of Hadrian, with the Vatican City. When the troops of the landsknechts of Charles V attacked Rome. Pope Clement VII saved himself by escaping along the Passetto. The Vatican Walls were built under the pontificates of Paul III, Pius IV, Pius V, and Urban VIII, to strengthen the Leonine walls and to defend the Basilica of St. Peter and the Vatican Hill. In the northern part stands the bastion of Michelangelo, built in 1534.

The  Janiculum Walls, so-called because they pass along the Janiculum Hill, were built during the pontificates of Pope Urban VIII and Pope Innocent X, in the 17th century, to replace, with a different layout, a section of the Aurelian Walls, passing through the current Rione Trastevere. The city walls stretched from Porta Portese, rebuilt by Pope Innocent X, to Piazza del Sant'Uffizio, up to Piazza San Pietro.

The appearance of medieval Rome was characterized by a row of towers that, including those inserted in the walls, amounted to about nine hundred. The towers marked the division of the town into many possessions and were, for the great families, a symbol of supremacy. In Via dei Fori Imperiali, at the junction with Via Cavour stands the Torre dei Conti, built in the thirteenth century and known in the Middle Ages for its majesty as "Torre Maggiore". Behind the structure, going up along via Tor dei Conti, you reach the Torre del Grillo, built upon the remains of walls dating back to the Trajan era. At the end of the climb, there is the Torre delle Milizie, commissioned by Pope Gregory IX in the thirteenth century. Leaning on Piazza Navona, there are the Torre dei Sanguigni and the Torre dei Millini. Finally, in via dei Portoghesi, you can see the Torre dei Frangipane, more often called Torre della Scimmia (Tower of the Monkey).

The Triumphal Arches are typical Roman buildings. They consisted of structures in the form of a monumental arched door that were erected to celebrate emperors or leaders after a war victory. The first arches were built in wood and brick and were without decorations, which were added over time. Nowadays in Rome, there are only three left. The Arch of Titus, inside the Roman Forum, was built by Domitian in 81 A.D. to commemorate the victories of Vespasian and Titus over the Jews. In medieval times, the arch was incorporated into the fortress of the Frangipane and was "freed" only thanks to the restoration that Pope Pius VII entrusted in 1821 to Giuseppe Valadier. The Arch of Septimius Severus, built in 203 A.D. on the Via Sacra, commemorates the victories of the emperor and his two sons, Caracalla and Geta, against the Parthians, the Arabs, the Adiabeni. It is covered in marble and has a structure with three intercommunicating arches. The Arch of Constantine, next to the Colosseum, celebrates Constantine’s victory over Maxentius at the Milvian Bridge (312 A.D.). It is the largest arch (it reaches 25 meters in height!) and the best preserved among the surviving ones. 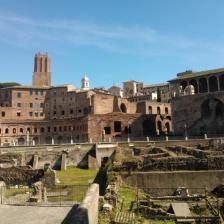 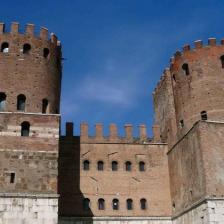 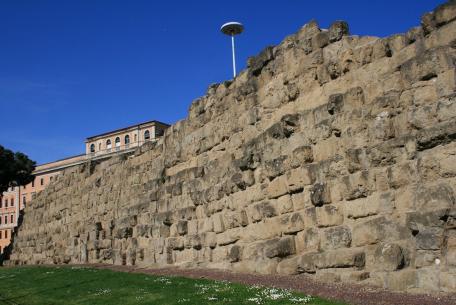 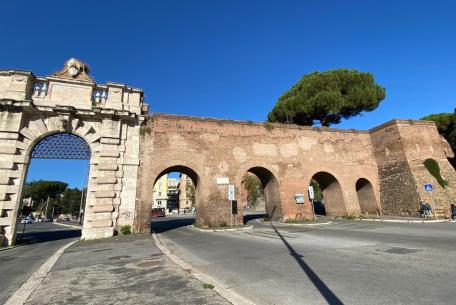 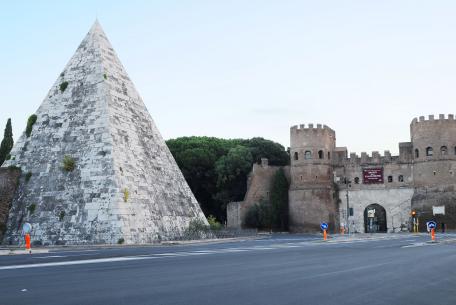 The Pyramid of Caius Cestius
Monuments 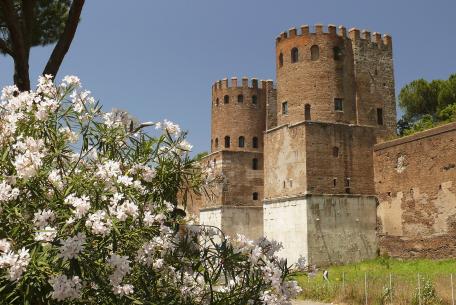 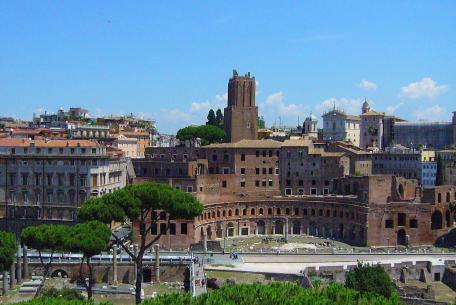 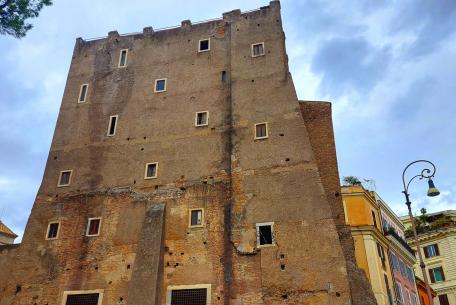 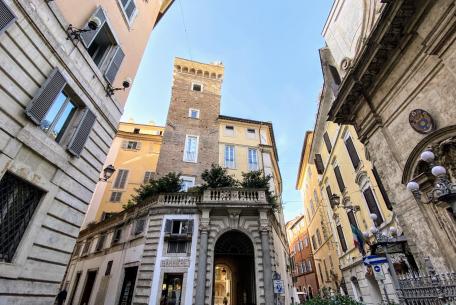 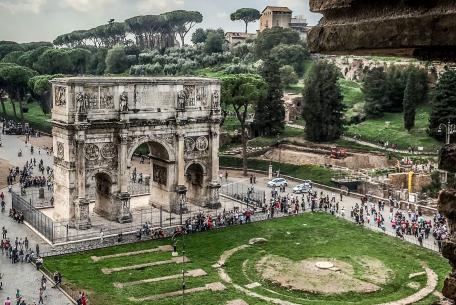 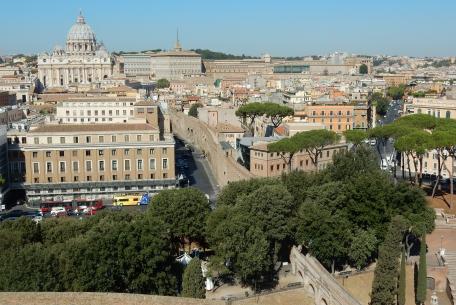 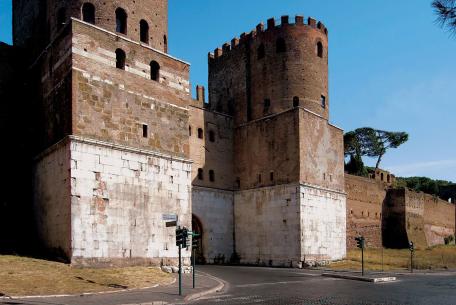