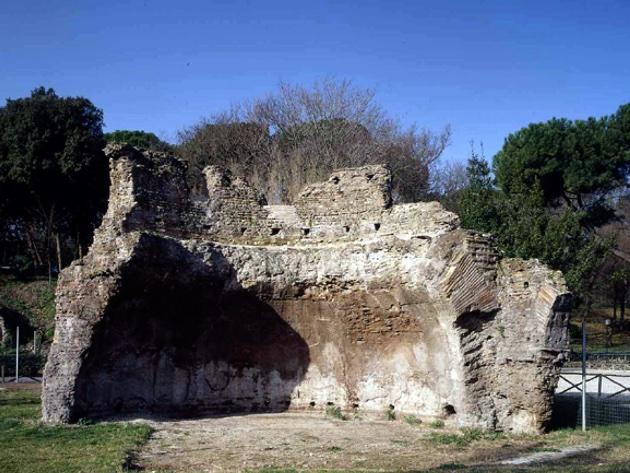 The so-called Domus Parthorum, or House of the Parthians, is an ancient monumental complex, not yet fully investigated, located inside the current "Nando Martellini" Stadium of the Baths of Caracalla: even if they cannot be visited, its remains are so impressive to still be visible from the outside.

The complex was originally intended for public use, although it is difficult to define its type and function. Its construction probably began in the Severian period, that is, between the end of the 2nd and the beginning of the 3rd century AD. A nymphaeum almost 30 meters long, with a central niche and three orders of niches on the sides, and a large rectangular room belong to this first phase. Less than a century later, a circular domed hall and a barrel-vaulted room were added: the structures were probably part of a public bath or a rich private domus. Finally, an apsed basilica hall dates back to a third construction phase, dating back to the 4th century AD, maybe the representative room of an aristocratic domus. A fire that occurred at the beginning of the 5th century AD. caused the destruction and abandonment of all the buildings in the area, with the exception of the basilica hall which continued to live independently of the rest of the complex, perhaps transformed into a sacred building. The monument is closed until further notice, visible from outside.