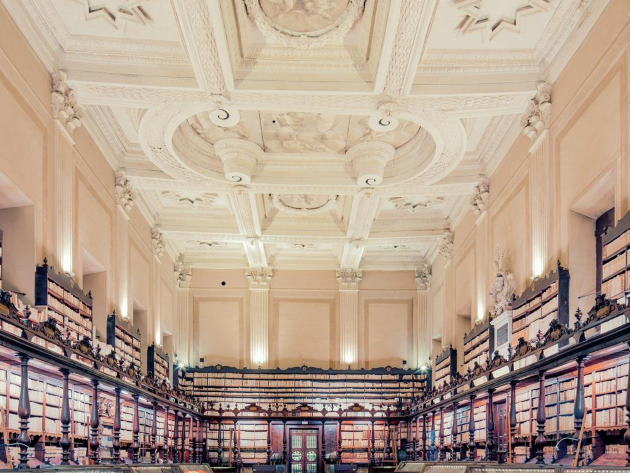 Without libraries, as Ray Bradbury wrote, we have “neither past nor future”, and it is no coincidence that all the great ancient civilizations tried to preserve their knowledge and their memory thanks to them. Cultural centers and custodians of an immense heritage, Rome’s historical libraries are a wonderful microcosm where books, art, history, and architecture coexist and intertwine. They talk about how we are and how we were and allow us to “read” Rome in a different way.

Here you can find seven of them, to help you discovering their origin, their history, and their beauty, often unknown to the majority of people since they are outside the usual tourist routes

Opened in 1604, it is one of the oldest public libraries in the world, a primacy it shares with the Ambrosiana in Milan and the Bodleian Library in Oxford. The library is set in a wing of the Augustinian complex, an apparently anonymous building next to the Church of Sant’Agostino, renovated in the mid-eighteenth century by the architect Luigi Vanvitelli. His reading room (known as the Vanvitelli’s “vase”) is characterized by a precious wooden shelving and its beauty is extraordinary. The library holdings now consist of nearly 200 thousand volumes, half of which belonging to the “Ancient Fund”, including manuscripts, incunabula (that is, books printed before the 16th century), Cinquecentine (16th-century editions), texts on Saint Augustine, cartography and travels of Columbus.

The 15th-century Palazzo Corsini, enlarged in the 18th century by Ferdinando Fuga, is one of the most magnificent Roman noble palaces, located between Villa Farnesina and the Botanical Garden of Rome. Today it is home to both the National Gallery of Ancient Art and this enchanting library, which owes its double name to the origins of its book collections, the Accademia dei Licei collection and that of the Corsini princes. The library owns more than 500 thousand volumes and three hundred manuscripts, including a first edition of the Divine Comedy and the first printed edition of the “De architectura”. Worth mentioning is also a manuscript signed by Galileo Galilei, one of the earliest members of the scientific academy – the oldest in the world – founded in 1603 by Federico Cesi: “Galileus Galileus Linceus Vincentii filius Florentinus etatis mee year 48 salutis 1611 mantis proper scripsi”.

Inaugurated on 3 November 1701 in a building built in the area of a cloister of Santa Maria Sopra Minerva, the library owes its name to Cardinal Girolamo Casanate, who donated his book collection to the convent of the church. The white marble statue of the cardinal still watches over the large and elegant vaulted monumental hall, which houses part of the 400 thousand volumes preserved here, including six thousand manuscripts and over two thousand incunabula. The double order of wooden shelves along the walls is still marked by golden scrolls, directing to the different sciences and disciplines. The books are in fact organized in the ancient way, from the sacred scriptures to the topics considered less worthy, such as poetry, literature, history.

A few steps from the Trinità dei Monti staircase, the frightening stone mask of Palazzo Zuccari marks the entrance to one of the most important places in the world for the conservation of books and sources for art history, from rare incunabula to entirely digital editions . Named after its founder Enriette Hertz and established in 1913, the library is managed and financed by the German government through the Max Planck research institute and is one of the most modern libraries in Rome: in the new transparent and luminous structure designed by architect Navarro Baldeweg and inaugurated in 2013, the reading rooms are distributed around a courtyard, with sloping balconies that recall the terraced gardens that, according ancient sources, adorned the Roman Villa of Lucullus, whose remains were found underground during the expansion works.

Founded in 1711 by the physician, epidemiologist and anatomist Giovanni Maria Lancisi and centered upon the study of the history of medicine, the library is housed within the Monumental Complex of Santo Spirito in Sassia, on the main floor of the 16th-century Palazzo del Commendatore. The reading room is furnished with 18th-century “armari” and has a magnificent 18-century fresco on the vault. A small window placed behind one of the walls of the library allowed the various “Commendatori” who managed the Institute to control the staff involved in the care of the sick. The library owns almost 20 thousand volumes, including the illuminated codex “Liber Fraternitatis Sanctis Spiritus in Saxia de Urbe”, with thousands of autographed signatures of popes, kings, nobles and ordinary people, which became members of the Confraternita Ospitaliera di Santo Spirito and lifelong benefactors of the hospital.

The library has been housed since 1924 in Palazzetto Mattei, a splendid building overlooking the gardens of Villa Celimontana and built by Jacopo del Duca in the second half of the 16th century. Worth noting are also the sacred and profane neoclassical paintings, and a Roman mosaic from the third century AD, inserted in the building during the 19th-century restoration works. Highly specialized, the library is the flagship of the Italian Geographical Society: it’s the most important in Italy and among the largest in Europe. It owns over 400 thousand precious volumes, including ancient texts, printed works, rare travel manuscripts ranging from the 16th to the 19th century, as well as an amazing cartographic collection with Chinese and Japanese handwritten geographical maps.

The birth of the library, already documented in 1581, reflects the attention that congregation founded by Filippo Neri always had for books: according to the Rule, meals had to be accompanied by the reading of a religious text. Its current seat is on the second floor of the Oratorio dei Filippini, next to the church of Santa Maria in Vallicella: Francesco Borromini was called in the first half of the 17th century to design a complex building similar to “a human body with open arms”. In the large rectangular reading room with sixteen windows, a large 17th-century wooden shelving houses part of the approximately 130 thousand volumes owned by the library, while the wooden and stucco ceiling, decorated with monochrome canvases, creates a unique marble effect. In the monumental staircase it is possible to admire another important work of the Roman Baroque, the high relief by Alessandro Algardi depicting Pope Leo I and Attila. 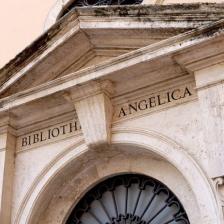 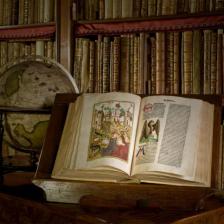 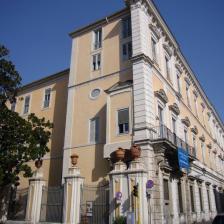 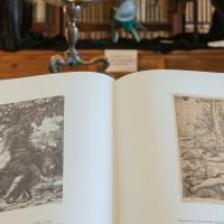 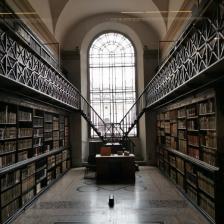 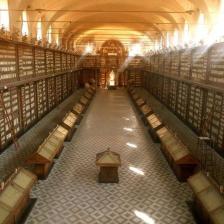 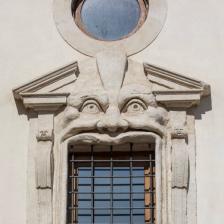 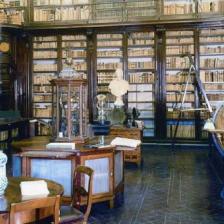 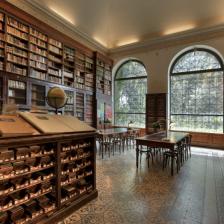 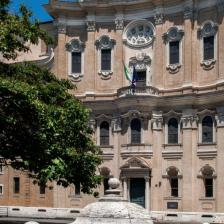 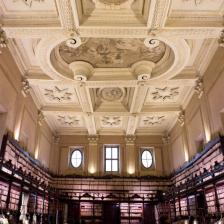 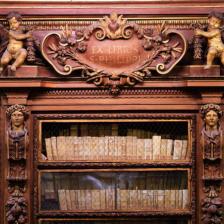