The Basilica of Sant'Agnese outside the Walls and the Mausoleum of Santa Costanza
Monuments
Via Nomentana, 349

This Basilica was built in 324, at the behest of Constance daughter of the emperor Constantine, above the ruins of a cemetery and catacombs that housed the remains of the Saint.

The Catacombs of Priscilla
Monuments
Via Salaria, 430

The Catacomb of Priscilla is the best preserved and the oldest general cemetery of Early Christian Rome. It is located along Via Salaria. In central Rome, just a stone’s throw from the old city centre, we find one of the most characteristic of the city’s districts or boroughs. MACRO occupies part of a building complex designed at the beginning of the 20th century by Gustavo Giovannoni for the Peroni brewery factories, in operation until 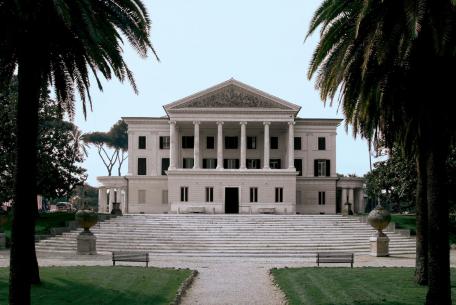 Villa Torlonia, the most recent of the villas belonging to Rome’s nobility, still retains a particular fascination due to the originality of its English-style garden (one of the few examples in the 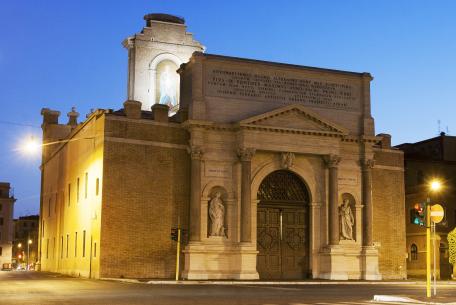 Between 1561 and 1565 the ancient Porta Nomentana was replaced by Porta Pia which, located on the square of the same name, is one of the 18 gates inserted in the defensive Aurelian 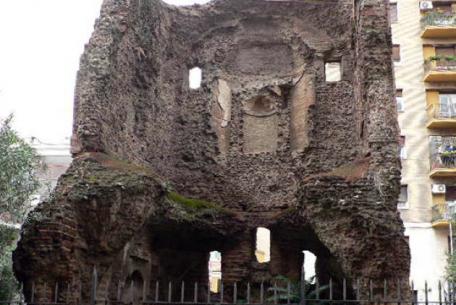 The monument is situated in the square of the same name, along Via Nomentana, nearby the church of Santa Agnese. 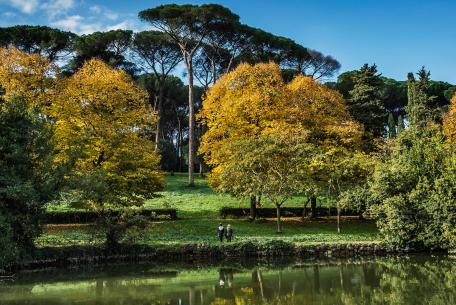 Initially property of the Pamphilj family, Villa Torlonia was one of the numerous agricultural estates, lush with orchards, vines, and reeds, along Via Nomentana.

Between Via Salaria and Via Nomentana is the elegant Trieste district, a residential area founded in 1926 with the name of the Royal House of Savoy, in homage to the then ruling house. Since 1946, the district has taken its current name from its central road.

Bordering the adjacent Parioli district is the splendid Villa Ada. It is a magnificent example of an English garden with ponds, neoclassical and eclectic buildings. The villa, now housing the Embassy of Egypt, was once the private residence of Vittorio Emanuele III and the House of Savoy; inside is an air-raid shelter intended for the exclusive use of the Royal family during the Second World War. In front of the entrance to Villa Ada are some catacombs, including those of Priscilla. Among the largest and most ancient in Rome, they date back to the end of the 2nd century. The catacombs take their name from the land's owner, the Roman matron Priscilla, whose son would have hosted St. Peter.

In the area is the Quartiere Aficano (African District), so called referring to the streets named after the former Italian colonies in Africa. Here, you can admire the Sepulcher of Elio Callistio from the mid-2nd century AD. Following the collapse of the facade, it was called the "Devil's Chair". In medieval times, many eerie legends were born: people began to believe that it was a demonic place, as well as the throne of Satan.

A short distance away is the Monumental Complex of Sant'Agnese fuori le Mura, which brings together different buildings: the Constantinian basilica, built between 337 and 351 AD by the will of Costanza, daughter of the emperor Constantine, of which some ruins remain; the evocative Mausoleum of Santa Costanza, erected at the beginning of the 4th century, one of the most important monuments of late-ancient architecture, much loved by the couples to swear a love oath with a religious wedding; the basilica built by Pope Honorius I (625-638), one of the most intact and outstanding examples of an ancient Christian basilica; the catacombs of Sant'Agnese, martyred in the 3rd century.

At the corner of Via Tagliamento and Via Dora, an imposing, richly decorated arch connects the two palaces of the ambassadors. It is the entrance to the Coppedè district, a complex of 26 buildings and 17 villas with unexpected and bizarre features. The "pastiche" of architectural languages ​​was designed, between 1915 and 1927, by the eclectic architect Gino Coppedè. It extends around Piazza Mincio, surrounded by "fairy-tale" buildings, such as the Palazzina del Ragno and the Villino delle Fate. At the centre of the square is the enchanting Fontana delle Rane (Fountain of the Frogs). Its dreamlike atmosphere has captivated many cinema directors: Dario Argento used it as the location of Inferno and The bird with crystal feathers, Francesco Barilli for The perfume of the lady in black, Nando Cicero for Last Tango in Zagarolo, and Nanni Loy in Hold-up à la Milanaise.

On the other side of Via Nomentana is Villa Torlonia, originally one of the numerous agricultural estates in the area, transformed into a sumptuous residence at the end of the 18th century. The dwelling of the Mussolini family from 1925 to 1943, today the villa is a magnificent public park that houses three important museums: the Museum of the Casina delle Civette, dedicated to artistic stained glass, the Casino Nobile, which houses the Museo della Villa and the collection of the Scuola Romana, the Casino dei Principi, home to the Archivio della Scuola Romana and space for temporary exhibitions. A few steps away is Villa Blanc, built by the architect Giacomo Boni in 1897 at the behest of Baron Alberto Blanc. A fine example of "eclectic" art, the villa is currently home to the prestigious Luiss Business School.

The Salario district, born in the early years of the last century, takes its name from the consular road of the same name, so called by the ancient Romans for the salt transport. The neighbourhood was reduced in 1926 with the creation of the current Trieste district and is now a lively and elegant residential area.

One of its jewels is the marvellous Villa Albani, an 18th-century masterpiece created for Cardinal Alessandro Albani to house the prestigious antiquities collection curated by Winckelmann. The sumptuous, frescoed building and the Italian garden with pavilions and fountains, closed by the Coffee-house hemicycle, are splendid. They are testimonies to one of the highest expressions of that antiquarian taste that emerged in the mid-eighteenth century when Rome became a Grand Tour privileged destination. Inside, it houses precious, ancient sculptures and works of art by artists such as Niccolò da Foligno, Perugino, Gherardo delle Notti, van Dyck, Tintoretto, Ribera, Guercino, Giulio Romano, Borgognone, Luca Giordano, David, Vanvitelli.

From the late Baroque and neoclassical styles of Villa Albani, let's move on to a rare example of the integration between industrial archaeology and contemporary architecture. We are talking about the Macro, Museum of Contemporary Art in Rome, which occupies part of the early 20th-century complex of the former Peroni brewery. Programmed as a "Museum for Preventive Imagination", the space is today conceived as a three-dimensional magazine - developed around themes and formats - that welcome heterogeneous contents.

A short distance away are the Monumento al Bersagliere and Porta Pia, ideal access to the district and one of the most important monuments of the Italian Risorgimento. This historic place was the scene of the battle that marked the annexation of Rome to the Kingdom of Italy: on 20 September 1870, the famous breach was opened here.