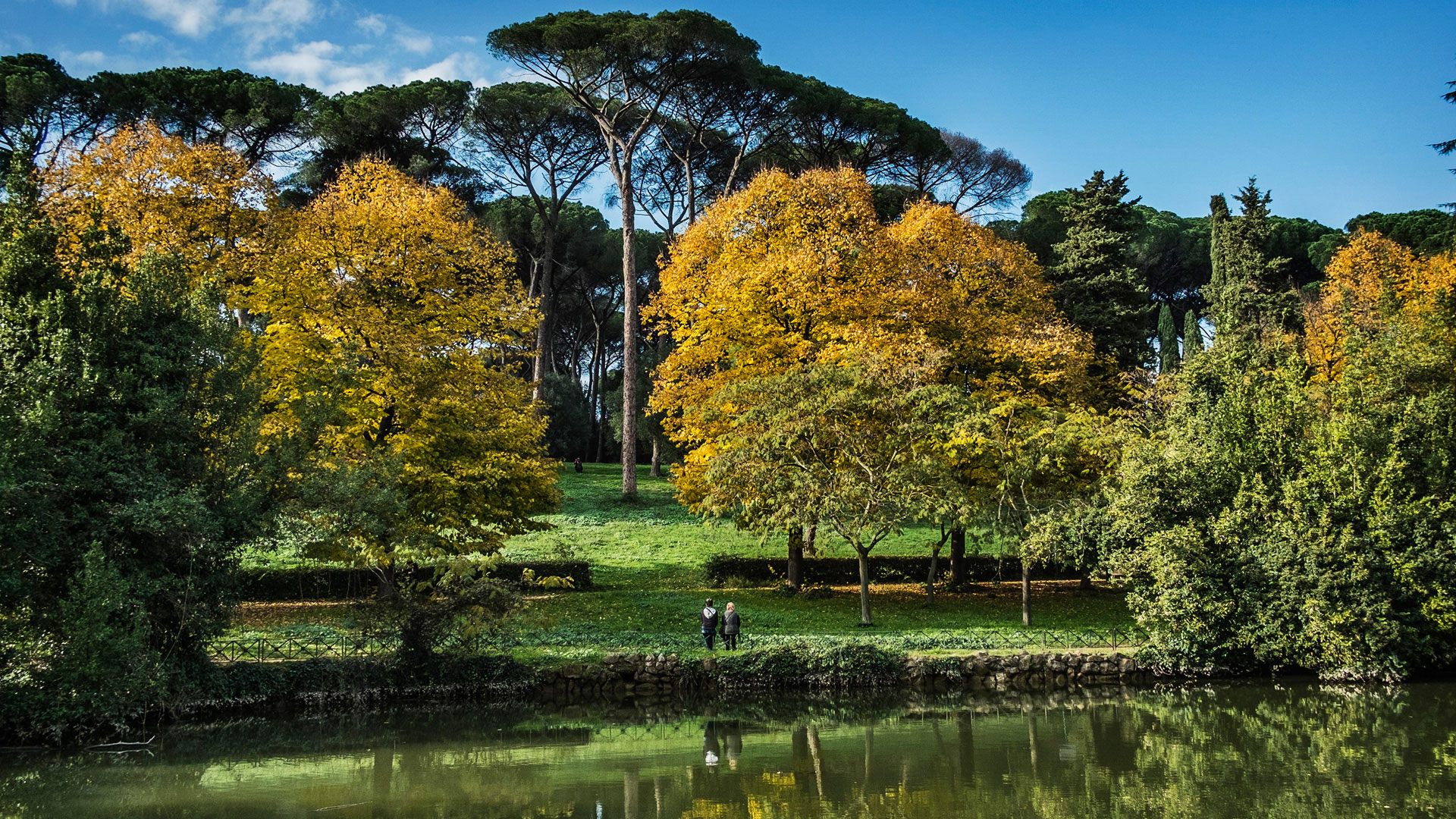 A green jewel bigger than Villa Borghese and second in extension only to the Appia Antica Regional Park and Villa Doria Pamphilj, the urban park located in the northern area of the city, along Via Salaria (the ancient salt road), is an enchanting example of landscaped or English garden, housing several neoclassical and eclectic buildings. Its around 160 hectares also include the remains of Antemnae, an ancient urban settlement older than Rome, built on the homonymous mountain at the confluence of the Tiber and Aniene rivers (Antemnae comes from the Latin ante amnem, “in front of the river”).

The history of Villa Ada Savoia is linked above all to the Savoy royal family, who owned it from 1872 to 1878 and again from 1904 to 1946. The Savoys carried out the main building and renovation works, even if the general layout of the villa dates back to the 18th century, when the lands were purchased by the Pallavicini family. Of this period is, for example, the coffee house at the Casino Pallavicini, better known as the Temple of Flora, overlooking a garden with a cast iron fountain in the center. It was then owned by the Potenziani family, a powerful family coming from the town of Rieti, and in 1871 it was bought by King Vittorio Emanuele II of Savoy who, with the transfer of the court to Rome, the new capital of the kingdom, promoted its expansion, extending the estate to some nearby lands. The estate was thus transformed into a rustic English park and in a few years several building were built, including the Casino Nobile, today the seat of the Embassy of the Arab Republic of Egypt, residential buildings and stables. The rural estates were transformed into a grandiose park, populated with exotic plants and embellished with small buildings, such as the Swiss Chalet and the Gothic tower.

In 1878, at the death of Vittorio Emanuele, the villa was sold to Count Giuseppe Tellfner who gave the property the name of his wife, Ada. The villa remained the property of the count until 1901; then, in 1904, it returned to the royal family thanks to Vittorio Emanuele III, who bought it back and donated it to his wife, Elena of Montenegro. The area towards Mount Antenne took the name of “Bosco Regina Elena”. In 1904 the monumental portal was built and the villa was enriched with new elements. During the Second World War, in 1941-1942, the villa was equipped with an anti-aircraft circular bunker to protect the king and his family, open to the public since 2006.

Following the Grand Council’s decision and after a meeting with the king, it was in Villa Ada Savoia that Benito Mussolini was arrested on 25 July 1943. With the advent of the Republic and following the hereditary affairs of the royal family, the park was opened to the public in several stages, from 1957 to 1996, although some buildings are still private, and therefore inaccessible.

Even if it lies in a high-density urban area, the park has largely retained its original appearance. Entering from the gate on via Panama, it is possible to explore its pine, holm oak, laurel and chestnut woods, populated by squirrels, hedgehogs, wild rabbits and large communities of birds. In other words, Villa Ada Savoia is an ideal place to spend a sunny day, to go jogging or simply relax outdoors