The Pincio terrace and promenade 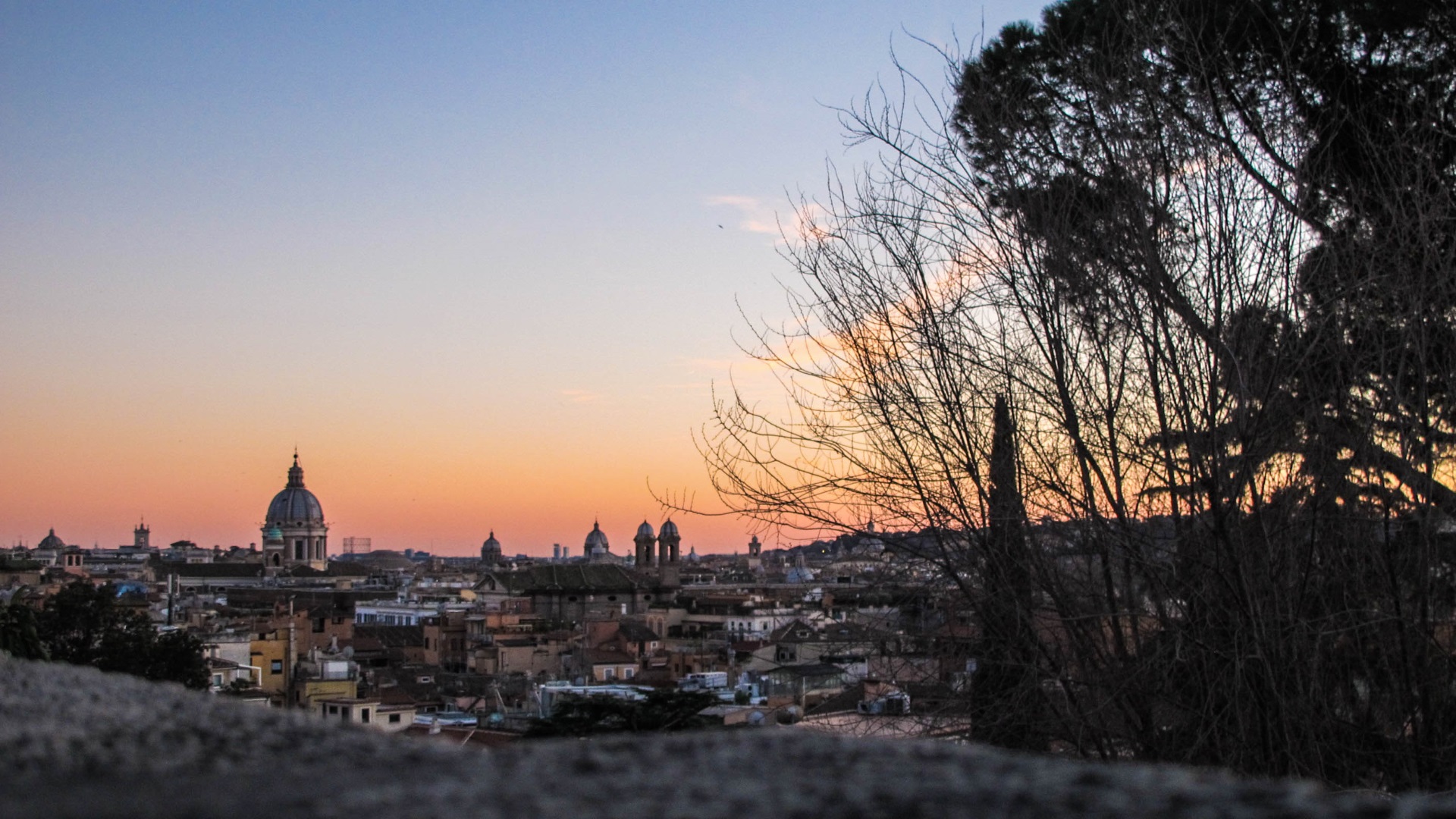 In the afternoon towards sunset, Rome has an unforgettable appearance, particularly from the Terrace of the Pincio, a grandiose public park created by Giuseppe Valadier (1834) and urban walk citizens love.

Below the Terrace, is the spacious Piazza del Popolo, looking like an imposing and lively theater. Beyond the balustrade, the city stretches: the majestic dome of San Pietro dominates the horizon, Monte Mario is on the right, the Quirinale Hill is on the left. In the distance, high on the Janiculum hill, you can guess the equestrian monument of Giuseppe Garibaldi. In the middle, architecturally well defined, the ancient 16th-century buildings stand out.

The visit continues towards Piazza di Spagna, where you can enjoy the panoramic elevations in front of Villa Medici near the cup fountain, also known as the Vasca del Pincio, and the Spanish steps of Trinità dei Monti, a magnificent baroque scenography by Francesco De Sanctis (1723-26).

You can access the Pincio promenade: from the ramps of Piazza del Popolo; from Viale di Villa Medici that connects the terrace to the Church and the steps of Trinità dei Monti; from Viale delle Magnolie; from the flyover on the Muro Torto that connects it to Villa Borghese from 1908.

The wide promenades of the park were intended for carriages passing. The only pedestrian access is from Viale delle Magnolie. The majestic entrance to the Pincio is from Piazza del Popolo, a scenographic backdrop with three perspectives on the slopes of the hill. These are connected by small stairway ramps and by the winding and suggestive Via Gabriele D'Annunzio, which, delimited by century-old trees and embellished by fountains, climbs up the slopes of the Pincio.

The first perspective (1830) consists of three niches. In the center, an ancient statue represents Igea, the goddess of health. The second perspective is constituted by the bas-relief depicting the Fame that crowns the Genes of the arts and commerce, below which there is a marble seat with two winged lions. The third perspective, on which the Belvedere terrace rests, consists of a covered loggia with three arches that insists on a building with three niches. Here, in 1936, inspired by Valadier Raffaele De Vico created a Nymphaeum as a fountain for the Virgin Water. On this occasion, the statue of Vittorio Emanuele who had been there since 1873 was moved.

You can access the loggia from the lateral stairway ramps. Close to the first hairpin, between the first and the second perspective, there is a small oval rustic cliff fountain. An ancient statue leans on it. It represents Dionysius or Hermaphrodite because, on the female body, there was the head of a Greek god. It was removed in 1970.

The current plan of the fountain is by Raffaele De Vico, who built it in 1936. If you continue climbing, you will meet the Convent of Santa Rita and a fountain with an ancient red granite tank, dating back to the II-III century. It has an oval shape with a lion from which the water flows, inserted in a circular basin.

In a small open space at the end of Viale del Pincio, you can find the bronze memorial, dedicated to the brothers Enrico and Giovanni Cairoli (1883) who died in Villa Glori in 1867. Then, you can reach Piazzale Napoleone I from which Belvedere, you can enjoy an incredible panorama of the city. The parade of the eminent men, a series of 229 commemorative busts installed here starting from 1849, starts here.

Behind the belvedere, a wide-open space hosts a small statue of Raffaello Sanzio (1838). On-axis with the square, instead, a circular fountain displays a little Moses in the waters of the Nile (1868).

After, you find Viale dell'Orologio and the water clock, which mechanism is associated with the Dominican Giovanni Battista Embriago. This hydro-chronometer stands in the center of a pond, surrounded by an iron gate, from 1873.
Go back to the square and take Viale del Belvedere on the right. It ends in an arboreal exedra where you can find the bust of Giuseppe Valadier. Next, you come across the statue of Aesculapius made by a body dating back to the 5th century and a head probably dating back to the 4th century.

At the end of the street, there is a statue of Cybele, probably dating back to the Antoninian period. It stood inside Palazzo dei Conservatori on the Capitoline Hill, together with the statues of Polymnia and Abundance, today in front of the Villa Medici entrance. In 1846, these three statues moved to the Pincio. The monument to Enrico Toti dates back to 1922.

At the end of Viale dell'Orologio, a building with two elevators created in 1926, allows you to go up from the tram stop below. Viale dell'Obelisco is still mostly organized according to the original Valadier project, in which he merged the Italian and the romantic English gardens.

In the middle of the road, there is the obelisk emperor Hadrian dedicated to Antinoo. Found near Porta Maggiore, it was transported and placed in the Pincio in 1822 at the behest of Pius VII. This whole area is organized according to the Casina Valadier, built by Giuseppe Valadier in 1813, who renovated the existing Della Rota casino into a café, making it one of the focal points of the walk.

The history of the Pincio
Once Colle dei Giardini, the Pincio promenade, on the homonymous hill, was already home to gardens during the Roman times. Its modern name derives from the Gens Pinciana, who came afterward. Among the Horti del Pincio, the Lucullus ones were particularly noteworthy. He was the first to build terraced gardens in this area.

During the 5th century AD, the Pinciano, a magnificent imperial palace, was built on this hill. The walk dates between 1810 and 1908. In 1814, the Napoleonic empire dissolved, but the works on the Pincio Hill started, according to the project by the French architect Berthault. They continued under the restored papal government, directed by Valadier.