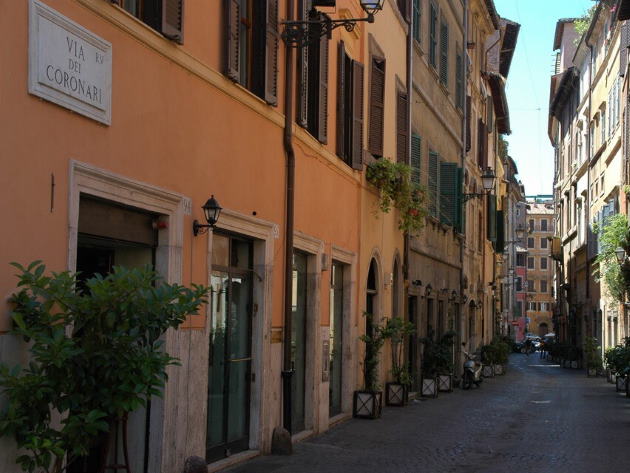 “All roads lead to Rome” is a well-known saying that refers to the extensive network of thoroughfares linking all the regions of our peninsula, up to the distant provinces of the Empire. In the heart of the city, however, there is a maze of streets and alleys that highlight a different page of the millennial history of Rome, “speaking” streets with evocative names that still pass on the memory of the artisans and vendors who had their shops there.

Here you can find seven of them, in alphabetical order, to discover with us their origin, their secrets, and their curiosities.

#1 Via dei Balestrari, from Piazza Campo de’ Fiori to Piazza della Quercia - already mentioned in the 15th century, the street owes its name to the important corporation of crossbows-makers and sellers, at the service of the “Happy society of crossbowmen and pavers,” the city militia composed of 3,000 men recruited in the historic districts of the city. The crossbow was one of the most devastating throwing weapons in battle, capable of piercing the armors of the knights. When it was replaced by firearms, many crossbowmen became arquebusiers but the street did not change its name. At street number 2, there’s the oldest Roman stone plaque, dating back to 1483. It remembers the reclamation of the place ordered by Sixtus IV. It was at the end of this street that, on 16 February 1600, the Dominican friar Giordano Bruno was burned alive for heresy. Since the late nineteenth century, his statue is at the center of Piazza Campo de’ Fiori.

#2 Via dei Baullari, from Corso Vittorio Emanuele II to Piazza Farnese - of medieval origin, the street had different names over the centuries, such as “via dei Valigiari,” “via de’ Ferravecchi” and “via della Marna,” in memory of the First World War’s battle. It then resumed the current denomination, due to the concentration of trunk-makers. Originally a narrow and unpaved street, it was enlarged in 1517 by Cardinal Alessandro Farnese, later Pope Paul III, to easily arrive to his residence in Piazza Farnese. When Corso Vittorio Emanuele II was built, the street was lowered by almost a meter: for this reason, in 1904 it was necessary to rebuild the facade of the building named after the street, the Piccola Farnesina ai Baullari, now home to the Museo Barracco.

#3 Via dei Chiavari, from Largo dei Chiavari to Via dei Giubbonari - the street delimits the border between the Rione Parione and Ponte, and between the scene and the quadriporticus of the ancient Theater of Pompey, the first masonry theater of Rome. Its name comes from the workshops of blacksmiths specialized in the manufacture of locks and keys, which settled in this area certainly before 1748, after having abandoned the Via Agonale, remaining there until the First World War. In the sixteenth century, key-makers were looked upon with suspicion: skilled in opening locks and forging keys of all kinds, they were accused of being accomplices of thieves and burglars. The street has many Renaissance and Baroque architectural examples, while an inscription from 1730 recalls that fine awaiting those who had dirtied the streets with garbage.

#4 Via dei Coronari, from Piazza di Tor Sanguigna to Piazza dei Coronari - until recently the street of Roman antiquaries, it was opened by Sixtus IV della Rovere and was the first straight road axis in the tangle of alleys of the medieval city. In the Renaissance it comprised two sections, one called “Scorticlaria,” because of the many dealers in leather goods, and the other “Immagine di Ponte,” named after a wayside shrine on a street corner, commissioned to Antonio da Sangallo the Younger. The street name comes from the “Coronari”: these, also named “Paternostari”, were the sellers of rosary beads (“corone “ in Italian) and other holy objects; they had their shops along the road, strategically situated since the way was part of the itinerary to the Saint Peter’s Basilica, along which walked the majority of pilgrims. In the street there are many Renaissance houses, including the so-called “house of Raphael” and the house of Fiammetta Michaelis, Cesare Borgia’s lover, buried in the nearby church of Sant'Agostino.

#5 Via dei Fornari, from Piazza della Madonna di Loreto to Via Quattro Novembre - Between Palazzo Valentini and the back of the Palazzo delle Generali, it was one of the few pedestrian streets in Renaissance Rome. The transit was in fact prohibited to carriages so as not to disturb the patients of the hospital that the Università dei Fornari built here in 1507, together with the nearby Church of Santa Maria di Loreto. As their headquarters, the Fornari (bakers) had chosen the place where Emperor Trajan had built the city’s bread market, the Forum Pistorium. The urban changes that affected the area after the unification of Italy largely changed the appearance of the street. During the work, the house that hosted Michelangelo Buonarroti until his death was also destroyed. A stone plaque in the most secluded corner of Piazza Venezia, near the ruins of the Trajan’s Forum, marks the place where it stood “Qui era la casa consacrata dalla dimora e dalla morte del divino Michelangelo. SPQR 1871”. (Here was the house consecrated by the residence and death of the divine Michelangelo. SPQR 1871 ).

#6 Via dei Funari, from Piazza Mattei to Piazza Campitelli - the street owes its name to the manufacturers of ropes who had settled here using the remains of the ancient Circus Flaminius or Crypta Balbi as their shops. In the street there is the Church of Santa Caterina de’ Funari, built on the medieval “Santa Maria de Dominae Rosae in castro aureo” (“castrum aureum” is the Circus Flaminius). In 1534, the church was granted by Paul III to St. Ignatius of Loyola, who also built an orphanage. On November 25, on the day of Saint Catherine, the girls paraded in procession towards the Basilica of the Holy XII Apostles to be chosen by future husbands. The remains of the set of dishes that each girl had, with her own name engraved under the plates, are among the finds preserved in the National Roman Museum - Crypta Balbi.

#7 Via de’ Giubbonari, from Piazza Benedetto Cairoli to Piazza Campo de’ Fiori - until the Middle Ages, it was called via Pelamantelli, because of the artisans who prepared woolen and coarse cloth fabrics that had their shops there. The current name comes from the manufacturers of “gipponi”, that is, corsets and busts, called Gipponari (from the Latin “Jupponarii”), a term that over time turned into Giubbonari. Along the street, it is possible to admire Palazzo Barberini ai Giubbonari, the so-called “Casa Grande dei Barberini,” begun by Francesco Barberini in 1581 and enriched in the following years by his nephew Maffeo. However, when Maffeo became Pope with the name of Urban VIII, the family moved to the majestic building in Via Quattro Fontane. In one of the buildings on the street, once lived the painter Cavalier D’Arpino, the author of the splendid frescoes in the Sala degli Orazi and Curiazi in the Capitoline Museums. A plaque at no. 64 instead recalls an episode that occurred in 1851: passing by carriage in the street, Pope Pius IX noticed a priest who was bringing the viaticum to a dying man. The Pope ordered the carriage to stop and joined the priest, to everyone's amazement.