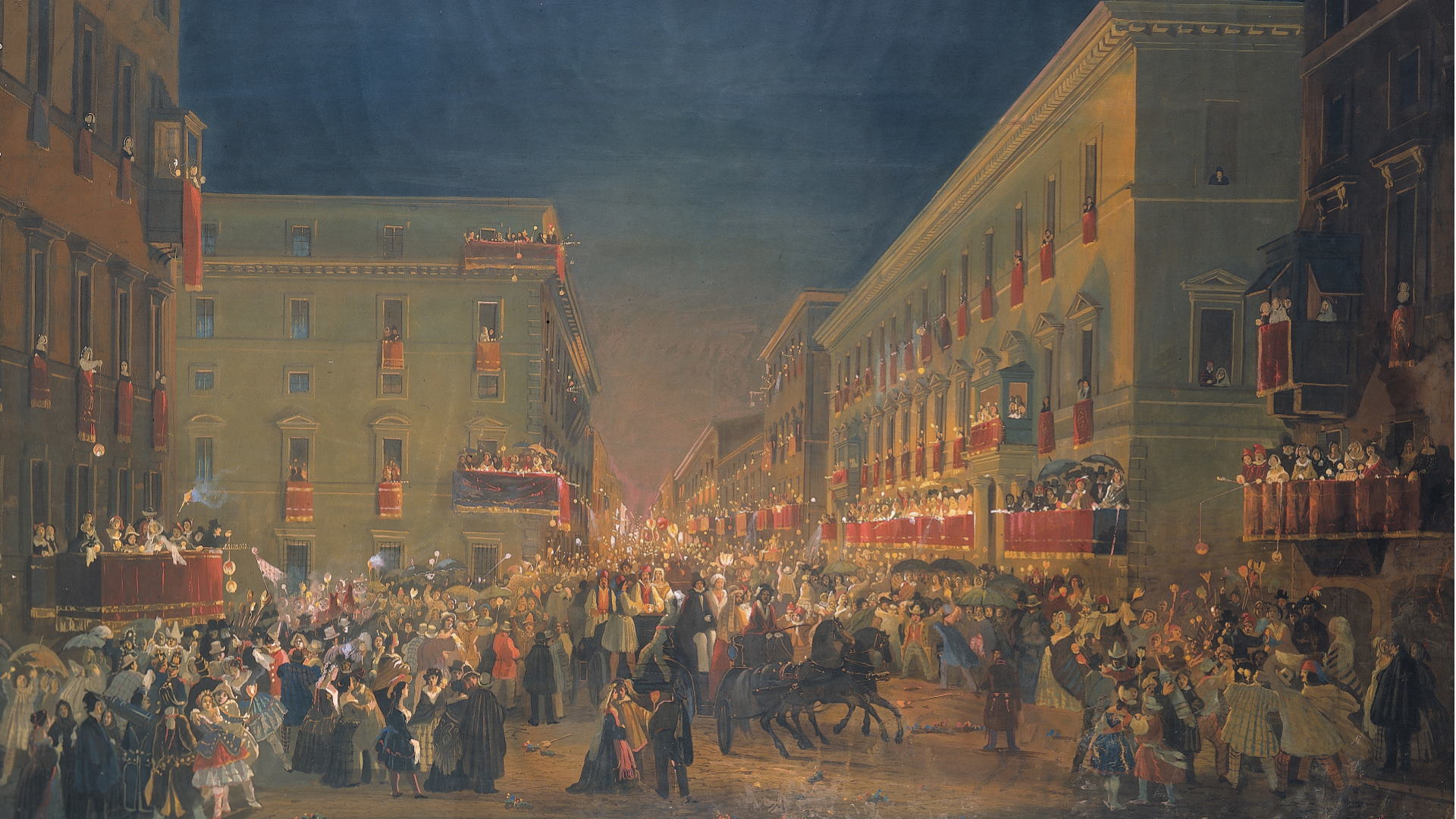 A license to transgress

A season of joyful collective foolishness in which the strict daily rules are suspended and everything is allowed – pranks, jokes and disguise – before Ash Wednesday gives start to the Lenten fasting and the purifying penitential practices preceding Easter. Carnival is, in its essence, a celebration linked to the Roman Catholic and Christian world. Yet, according to many, its beginnings may be linked to the pagan Saturnalian rites that were celebrated in ancient Rome until the late imperial age with banquets, sacrifices, dances and masquerades: a handful of days in which the world turned upside down, social differences were canceled and slaves could temporarily consider themselves as free men.

Palios, jousting and lots of meat

Let’s forget for a while the glories of Venice, Viareggio or Ivrea: there was a time when Rome also ruled on the Carnival side – a long time, which began as early as the Middle Ages. Historical sources relate that in the 12th century, during the so-called “ludus carnevalarii”, the pope reached on horseback Testaccio hill, accompanied by the prefect and the knights of the city, to attend the propitiatory ceremonies, while the noble families of Rome and neighboring countries engaged in duels, palios, jousting, bullfights and other battles with animals. The whole city took to the streets, keen to witness the whirlwind of events and exhibitions as well as take advantage of the meat from the slain animals. Suffice it to say that a popular favorite was for example the “ruzzica de li porci”, a race or rolling of pigs: carts of live pigs were thrown down the hill while the crowd gathered in the fields below and competed for the animals – or what was left of them. Knights tournaments also took place in Piazza Navona, at the time Platea in Agone.

However, it was only in the mid-15th century that Rome’s Carnival really took off. As a matter of fact, Rome became the world capital of Carnival when the Venetian cardinal Pietro Barbo ascended the papal throne as Pope Paul II. An energetic, active and flamboyant character, the cardinal had started to build the celebrated Palace of St. Mark (now the Palazzo Venezia) and then moved his residence there. As a result, the central place of the city, and of the Carnival, thus became the nearby Via Lata, the urban stretch of the ancient Flaminia Way: here on 9 February 1466 the pope inaugurated a sumptuous Renaissance Carnival, with allegorical processions inspired by Roman traditions and classical mythology, all for the pharaonic cost of 400 gold florins. But the long road stretch that leads from Porta del Popolo to Piazza Venezia seemed the natural setting also for another type of event: and it was precisely from these unique competitions that Via Lata took the modern name of Via del Corso, since corso means “race” in Italian. With a special Bull, the pope established that races had to be held on each of the eight non-holiday days of the Carnival season, with competing categories including horses, donkeys and buffaloes but also children, elderly, Jews. It was a mocking and grotesque spectacle, as wild as the original Carnival, which was partly interrupted in 1667 by Pope Clement IX.

The race of the Berber horses

The queen race, however, lasted unchanged with few exceptions until 1882: the race of the Berber horses, a North African breed of riding horses specially selected and trained. The rider-less horses were gathered in the Piazza del Popolo and they were started off at a given signal (the “mossa”). Goaded and annoyed by pins inserted in pitch balls, the horses flied down the whole length of the Corso (“carrriera”) amidst the roaring crowd and arrived to Piazza Venezia, where carpets put across the street marked the finish line. Here the horses were captured with great difficulty by the “barbareschi”, the stable boys (“ripresa”). Among the owners of the horses there were of course Rome’s most prominent aristocrats (such as the Altemps, the Gabrielli, the Rospigliosi families) but some of them were simple enthusiasts or small traders: the winner was rewarded with an embroidered banner, made of expensive fabric and forcibly payed for by the Jewish community. The event was so anticipated that places along the route were disputed well in advance. The richest and most powerful ones enjoyed the race from the stands built on the square or from the windows and balconies of the buildings that overlooked via del Corso, adorned with drapes and decorations and often rented at a high price; the less fortunate ordinary citizens were left with the crowded slopes of the Pincio. It goes without saying that the dash and fury of the horses, combined with the excitement of the crowd in search of strong emotions, did not fail to cause accidents, even fatal ones.

“Mor’ammazzato chi nun porta er moccolo”: Death to anyone who is not carrying a candle

Just when the Carnival was about to end, at sunset on Shrove Tuesday, a grand finale marked the end of the celebrations: a river of lights flooded the Corso with people yelling, screaming and roaring “Death to anyone who is not carrying a candle”. This was the “Festa dei moccoletti”: participants had to wear a mask and carry a candle (a torch, a light or even a lantern) called the “moccolo”, which could be thin like the “tail of a mouse ”or as large as “an Easter candle”. In an almost savage frenzy, the game involved trying protect one’s own light while extinguishing that of someone nearby. The penance for those who remained without flame was to take off the mask and be the target of insults and mockery, whether they were of noble origins or peasants. The festival, born at the end of the 18th century, represented a sort of symbolic funeral of the Carnival and had a strong ritual and symbolic relevance. But in the crowd, protected by the masks, everything happened: merciless jokes, thefts, stabbings, betrayals.

Masks and costumes for everybody

A great contribution to the atmosphere of freedom and eccentricity was given by masks, under which personal identity, sex and social status magically disappeared. Traditional masks included Rugantino, the Trastevere bully recognizable by his worn trousers and the handkerchief around his neck, Meo Patacca, the credulous noble Cassandrino, don Pasquale de’ Bisognosi, Doctor Gambalunga, General Mannaggia la Rocca who, at the head of an army of beggars, boasted of heroic deeds never completed, the gypsy and the Roman Pulcinella, of evident Neapolitan inspiration. Nobody gave up masking: those who could not afford a real costume resorted to fantasy but the charm of the disguise also yielded important personalities, famous artists, writers and musicians. In 1821 the masquerade of the future minister of Italy Massimo d’Azeglio, Gioacchino Rossini and Nicolò Paganini as fake blind itinerant players went to the news: on music composed by Rossini, d’Azeglio sang a nursery rhyme and the others accompanied him on the guitar wearing women clothes. And in the 1827 Carnival, poet Giuseppe Gioacchino Belli traveled the Corso in a carriage, loudly advertising his brand new elixir capable of healing from an infinity of ailments.

Between parades, processions, dances, people launching “confetti” (colored chalk balls) and “sbruffi” (small fragments of colored paper), jokes, parties, shows and sumptuous public banquets, the Roman Carnival was a colossal event for over four centuries, influencing the life, entertainment, culture and art of the city. It attracted and involved painters, poets, writers (Sangallo, Bramante, Raphael, Michelangelo, Tasso, Goldoni and many others) but also famous foreign travelers visiting the city. The collective euphoria that reigned during this event, its atmosphere and its color did not fail to impress, among others, Stendhal, Dumas, Dickens and Andersen. Goethe, who took part at the 1788 Carnival, described it as a festival “the people give themselves” in which everyone “has leave to be as mad and foolish as he likes” and where “almost everything, except fisticuffs and stabbing, is permissible”. Indeed, its fundamental and irreplaceable element was the Roman people with their sanguine vitality, their inventiveness and their ironic and disenchanted gaze. The sunset of the Carnival began only with the advent of the Savoy in Rome in 1870: for safety reasons many of the usual celebrations were banned, considered responsible for dramatic accidents (the race of the Berbers, first of all). After all, the change in the palace was too recent to allow the new order to be overthrown, even if only as a joke. 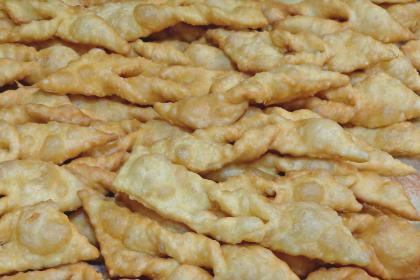 Traditional recipes of the Roman carnival 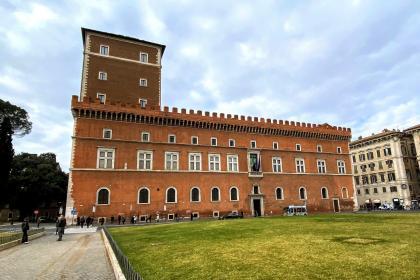