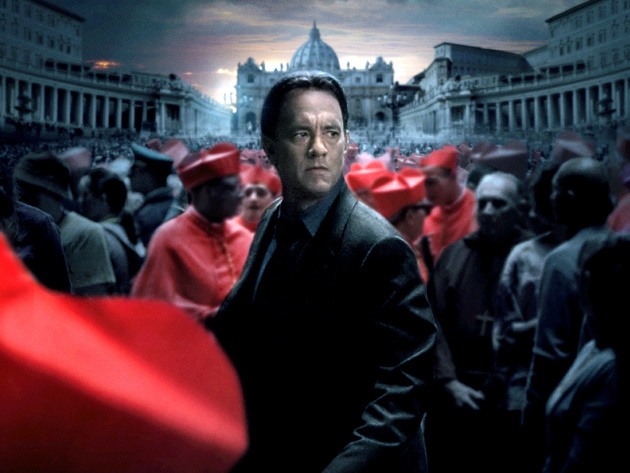 Antonia, a doctor in the treatment of AIDS, is married to Massimo with whom she has an intense and accomplice bond. Antonia's life is turned upside down by Massimo's sudden death.

The woman sinks into the darkest despair. One day, she goes to her husband’s office to recover his personal belongings, including a painting with a dedication on the back: "Your ignorant fairy". Antonia imagines a mysterious lover and begins to follow her tracks, which will eventually lead her to discover an unimagined and surprising reality.

For the title of his film, Ferzan Özpetek was inspired by the work of Magritte, a Belgian painter and one of the main exponents of Surrealism.

The painting we see in the movie, which begins Antonia's research, is not by Magritte: it is the work of a Joseph Lanti painter. The one in the film is, instead, a painting by Ferzan Ozpetek himself, when he was in high school.

Based on Dan Brown's best-selling novel, the film tells the exploits of Robert Langdon, a famous professor of symbology. Through his studies, he discovers evidence of the rebirth of an ancient and powerful secret brotherhood, the Illuminati. Their main goal is to destroy the Catholic Church.

Langdon ventures into a breathless hunt through sealed crypts, catacombs, and abandoned cathedrals, following and deciphering ancient symbols and clues.

Given the controversial theme, the Holy See had not issued any permits for the filming. The production managed to circumvent the papal vetoes, reconstructing the sacred places elsewhere with special effects and 250 thousand photographs secretly taken inside the Vatican, by a team of people mixed with tourists. It was possible to virtually recreate the square, all its statues, friezes, and details.

The images with the crowd were taken in the parking lot of the Hollywood Park in Los Angeles also by creating digital extras, some of which are Intelligent, able to move, clap their hands, scratch their noses.

The interior shots, on the other hand, were taken in the Royal Palace of Caserta.

Freely inspired by the Decameron, Giovanni Boccaccio's masterpiece from 1350, the film is divided into episodes that develop against the backdrop of a beautiful August Rome.

After 30 years, an architect returns to Rome in search of the places of his youth. Two American boyfriends are struggling with an extravagant friend of the girl, who tries to interfere in their relationship. An American girl falls in love with a young Italian lawyer and wants to introduce him to her parents arriving in the Capital. Her father, an undertaker, has incredible singing skills, but only in the shower. An ordinary man suddenly becomes very popular and besieged by the media, at the mercy of unexpected fame. A newly married couple from Pordenone risks getting lost in the city, giving rise to a series of misunderstandings.

Pierluigi Marchionne, the urban policeman in the initial sequence, is a real agent of the Rome Capitale Police. Woody Allen, bewitched by the white striped pedestal on Piazza Venezia, shoots there the opening scene of the film.

A long meditated title. To Rome with Love was supposed to be titled Bop Decameron, but a few months before the release, the title was changed because not all the public would have caught the reference. The title became to Nero Fiddled, perhaps referred to the emperor Nero, and then definitively replaced.

A masterpiece by Paolo Sorrentino and an Academy Award winner for Best Foreign Film in 2013. This film is a fresco of contemporary Rome, a seductive and wonderful city, yet pervaded by a tangible cultural void and the total absence of new intellectual stimuli. The 65-year-old Jep Gambardella, a journalist, writer, and affirmed literary critic acts in this deformed city. He takes stock of his lifetime, discovering how unauthentic it is.

In a journey at the end of the night like the one undertaken by Céline, Jep starts his search for a possible "great beauty" that leads him to live and experience a series of bizarre and grotesque situations, until the final epiphany.

The film, full of famous quotes, opens with the one from Louis-Ferdinand Céline's Voyage au bout de la Nuit, which also is the key to Jep's metaphorical journey. In a desecrating critique of society and humanity, Céline writes: "Traveling is really useful, it makes the imagination work. All the rest is disappointment and effort. The journey we are given is entirely imaginary. Here is its strength. It goes from life to death. Men, beasts, cities, and things, everything is invented. It is a novel, nothing more than a fictitious story. Littré says so, he is never wrong. And then, in any case, everyone can do the same. Just close your eyes. It's on the other side of life".

In the international poster of the film, Jep Gambardella seats and has a huge statue behind him. It is the Marforio, a marble sculpture from the Roman era, dating back to the I century. It depicts the god Neptune, the ocean, or the Tiber. Like Pasquino, it is one of the six talking statues in Rome. Today, you can find it in the courtyard of the Palazzo Nuovo at the Capitoline Museums.

An unusual documentary, in which Rosi overturns every convention, for a narration that smells the cinema.

Sacro GRA has no narrative voice or interviews, but only real-life scenes that take place near the Grande Raccordo Anulare, the gigantic structure surrounding Rome.

In the foreground is the human element, and its in-depth study by the director, to bring before the eyes of the spectator a very particular, but at the same time vital and authentic, urban scenery.

Roberto, a stretcher-bearer in ambulances, often spends his night helping the victims of road accidents. He lives alone and has a tender relationship with his mother.
Francesco, a botanist, defends an oasis of palm trees from the deadly parasitic beetle that attacks and kills them. His struggle is a kind of mission.
Prince Filippo Pellegrini lives with his family in the Boccea district, inside a sumptuous building that he rents for conferences, parades, cinema, and photo-novels. In the building, there is also a small theater.
Cesare is one of the last eel fishermen still left on the Tiber. He lives on a large raft by the river, not far from the point where its course joins the GRA viaducts.
Paolo, a decayed Piedmontese nobleman, lives with his daughter in a studio apartment of an anonymous building. In the same structure, the young son of an immigrant family enjoys deejaying.

The director spent more than two years in a small van on the Grande Raccordo Anulare, shooting hundreds of hours of filming.

In ancient Rome, Suburra was the district where power and crime met in secret. Today, after more than two thousand years, that place still exists in the city's great buildings of politics, in the silent rooms of the Vatican, and on the street, where crime weaves its network of connivances.

In this scenario, the events unfold and intertwine, giving rise to a slow and progressive descent into Hell. Between political intrigue and crime, the film recounts the seven days leading up to the collapse of the Italian government.

A recurring element of Sollima's work is water in its various forms: pouring rain, river, sea. The rain hits St. Peter's dome and the dark streets of the capital, to emphasize the apocalyptic atmosphere of the film, as well as its most corrupt, ruthless, and violent side.
But the rain is also redeeming water: it cancels and takes away amorality and intrigues. Panta Rei. Redemption is served!

About 2,000 extras were used during the filming.

Spectre is the first James Bond film shot in Rome, the 24th chapter of a saga that, since 1954, has fascinated generations of spectators with its intrigues, reckless and spectacular pursuits, and beautiful women.

In this chapter, we see the charming 007 engaged in another heart-pounding mission. A cryptic message from the past brings the secret agent of his Majesty to follow a path to expose a threatening organization, the SPECTRE.

Jumps, descents on the stairs, daring accidents, for total damage of 24 million Pounds. This was the amount spent to buy, and destroy, the shiny supercars: Aston Martins, Jaguars, and special vehicles. Twenty-four million which corresponds to 10% of the total budget of a £ 200 million production.

The film entered the Guinness Book of Records for the biggest explosion in the history of cinema, thanks to 8,418 liters of fuel and 33 kg of explosives.

The pursuit between Bond's DB-10 Aston Martin and Mr. Hinx's C-X75 Jaguar required the use of 15 prototypes: 8 Aston Martins and 7 Jaguars.

The first work of the young director and protagonist, Bangla tells the uncertainties of a 22-year-old Bengali born in Italy. Phaim lives in the Torpignattara district, a suburban and multi-ethnic neighborhood. He shares his life with his family and friends, works as a steward in a museum, and loves music. He meets Asia, a Roman girl from Northern Rome. The two fall in love.

His disenchanted way of narrating Rome and himself is very reminiscent of the first I am self-sufficient and Ecce Bombo Nanni Moretti.

The protagonist, as well as the director, live their identity between two worlds, Islam and Torpignattara, where many different individualities coexist: immigrants, hipsters, and old men playing cards.