The Column of the Immaculate | Turismo Roma
Skip to main content

The Column of the Immaculate 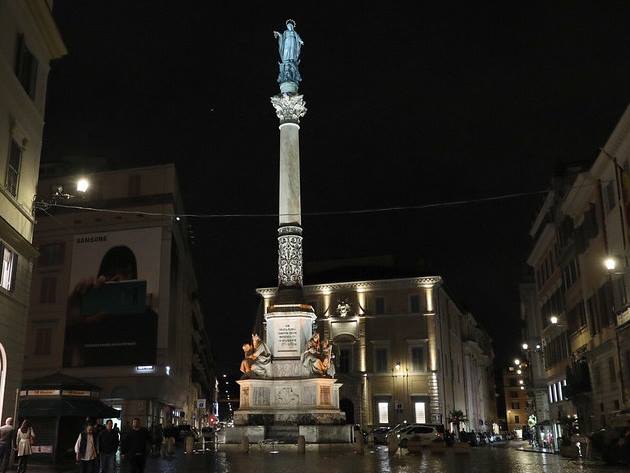 In Piazza Mignanelli, beside the Spanish Steps, is the column dedicated to the dogma of the Immaculate Conception, inaugurated on 8 December 1857.

It was found in 1777 in the Benedictine convent of S. Maria in Campo Marzio. Due to its incomplete construction, it had probably never been used and perhaps was in the remains of a marble workshop. The column remained beside Palazzo Montecitorio for about eighty years; then, in 1854, Pope Pius IX decided to erect a monument in honour of the Virgin, following the solemn promulgation of the dogma.

The works were financed by Ferdinand II, King of the Two Sicilies, as a symbolic gesture of reconciliation with the Church, and entrusted to the architect Luigi Poletti, who realized a rather elaborate work.

The column of veined cipolin marble is about 12 meters high with a diameter of 1 meters and a half. It stands on a marble base, which bears four bas-reliefs recalling the Annunciation, the dream of St. Joseph, the coronation of the Virgin, and the promulgation of the dogma. At the corners are the statues of the prophets Moses, Isaiah, Ezekiel and David. On top, the symbols of the Evangelists support the globe and the moon, on which stands the imposing bronze statue of the Virgin (4 meters high) realized by the sculptor Giuseppe Obici.

The raising of the column was the work of 220 firefighters, who gave life to the tradition with which, every year, they pay homage to the Virgin with a fresh flowers garland on the occasion of 8 December.