The Church of Jesus | Turismo Roma
Skip to main content

The Church of Jesus 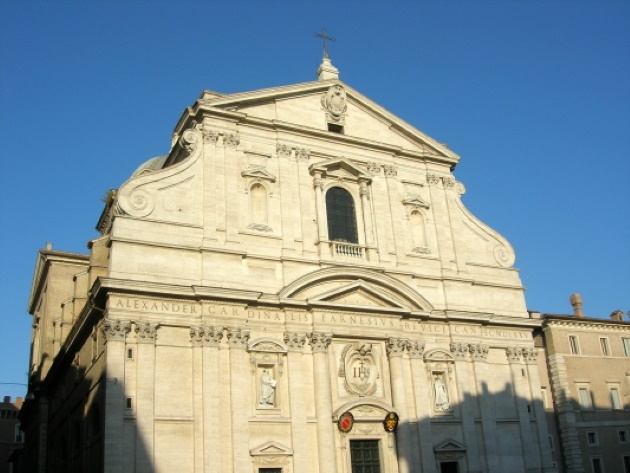 In 1551 Nanni di Baccio Biggio, a Florentine architect, was commissioned by Saint Ignatius of Loyola, to design a church for the Society of Jesus, a Catholic order. The plan, which shows a vast church with a single nave, side chapels and a not deep apse, was modified by Michelangelo in 1554, however his project was never realized.

Cardinal Alessandro Farnese provided funding in 1561 and commissioned Jacopo Barozzi called Vignola, one of his favourite architects, to design and build the church of Jesus in Rome.

Dissatisfied with the design of the facade by Vignola, Cardinal Alessandro Farnese chose Giacomo Della Porta’s project. The construction of the church began in 1568 and was completed by Giacomo Della Porta in 1575, after Vignola’s death.

In the second half of the 17th century, the vault was decorated with the “Triumph of the name of Jesus” frescoed by Giovanni Battista Gaulli called Baciccia, while the luxurious Chapel of Saint Ignatius of Loyola, with the saint’s tomb located on the left side of the transept, was built and decorated with lapis lazuli and gilded bronze by Andrea Pozzo.

In the mid-19th century, the apse was decorated, and the main altar was built. From 1858 to 1861 the ornamentation of the church was completed thanks to the generosity of the prince Alessandro Torlonia, who commissioned the marble coating of the nave.

Next to the church there is the Professa House overlooking the square of the same name, which hosts Saint Ignatius’s rooms, where the saint lived and died, which preserve the original decoration by Andrea Pozzo and Borgognone.

For the times of the masses and how to visit the museum, please consult the contacts indicated. For visits to the rooms of Sant'Ignazio, please complete the form at the following link https://www.chiesadelgesu.org/prenotazione-messe