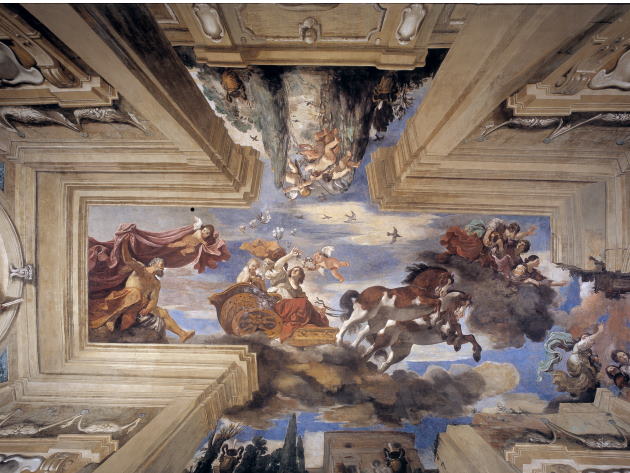 Admired by poets and writers such as Goethe, Stendhal, Gogol and D’Annunzio, the Villa Ludovisi with its enchanting gardens stood on the ancient Horti Sallustiani and occupied an area of ​​over 30 hectares, from the Salaria gate to the Pinciana gate, up to the border of the convent of the Capuchins. Destroyed in the name of building speculation at the end of the 19th century, the villa was divided up to make way for an upper middle-class neighborhood, the current Ludovisi district: the Casino is the only portion spared from the demolitions. Known as the Casino dell’Aurora, it is the current residence of the Princes of Piombino.

Built in the 16th century, the Casino is an elegant two-storey building with attic and lookout tower. In 1858 it was enlarged by adding an avant-corps on each wing, thus giving it a cross shaped plan: Prince Antonio Boncompagni-Ludovisi wanted the restoration, as the inscription at the entrance recalls. Art works and frescoes decorate it. Among the most important works, the famous tempera fresco by Guercino depicting the Aurora. Crowned with a garland of roses by a cupid, the Aurora flies on a gig pulled by two horses in the immensity of the celestial vault, as the night disappears with the arrival of the new day. Guercino’s coworker Agostino Tassi was responsible for the architecture painted in fresco technique. Also by Guercino are the frescoes on the walls of the Sala del Camino, with landscapes that simulate open spaces, and the allegorical representation of Fame on the ceiling of the Hall of the same name: in the center hovers the personification of Fame, holding an extremely long trumpet, followed by the personifications of Honor and Virtue. Their crimson red and golden yellow robes recalls the colors of the Ludovisi family crest.

Finally, a tiny room on the second floor preserves, on the vault, an oil painting on the wall attributed to Caravaggio, perhaps painted for the Cardinal del Monte, protector of the painter and owner of the Casino for some years. Since the cardinal dabbled in alchemy, Caravaggio would have painted an allegory of Paracelsus’ alchemical triad. Painted using a bold perspective through the upside down technique, Jupiter, Pluto and Neptune are accompanied by the symbolic animals that represent them: the eagle, Cerberus and a sea horse. At the center of the scene is a large luminous sphere in which zodiac signs can be recognized. 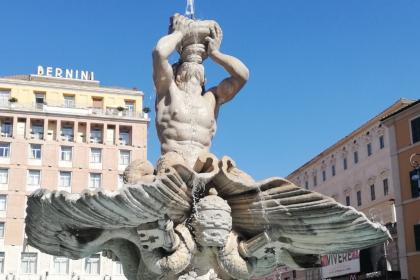