Seven optical tricks in art: Rome and the magnificent deception in painting and architecture | Turismo Roma
Skip to main content

Seven optical tricks in art: Rome and the magnificent deception in painting and architecture The wonder of art or the art of wonder? From trompe-l’œil paintings that magically make three-dimensional objects appear on a surface, to images that appear in their true shape when viewed in some “unconventional” way, fake architectures and illusionist perspective, there are many examples of how to play with space, amplifying its dimensions or modifying its perception, and creating compositions able to enchant and excite.

“Ingenuity and design constitute the Magic Art by whose means you deceive the eye and make your audience gaze in wonder”: so wrote Gian Lorenzo Bernini, one of the great masters of the baroque movement, whose aesthetics focused on theatricality and illusionism. Here you will find seven extraordinary Roman optical illusions, to make you discover how beautiful it can sometimes be to be deceived.

#1 Palazzo Barberini, The Triumph of Divine Providence - An imposing work in an amazing place: in 1639 Pietro da Cortona frescoed the vault of the main hall of Palazzo Barberini with a masterpiece of optical illusion. The Triumph of Divine Providence celebrates the power of the Barberini family – whose bees on the coat of arms appear in the center of the ceiling – through a myriad of characters, set in a space dilated to infinity beyond the limits imposed by the architecture. With its swirling vitality, its frenetic rhythm, its scenographic illusionism, the work conveys a feeling of vertigo: the painting seems to overflow from the fake marble cornice dividing the vault into five compartments and makes the fresco the manifesto of the new Baroque style.

#2 Galleria Spada, Perspective corridor - Realized between 1652 and 1653 by Francesco Borromini for Cardinal Bernardino Spada, who was fond of perspective games and illusions, it is an incredible work that plays with the view of the spectators, but also a refined warning against the illusory nature of earthly life. By using perspective devices – for example, the downward ceiling, the slightly uphill floor, the converging walls and the side columns that gradually get smaller – the colonnade seems in fact more than 30 meters long although measuring less than nine. To increase the illusion, on the back wall there’s a statuette that becomes the vanishing point of the whole architecture: it seems life-size but in reality it is less than a meter high.

#3 Saint Peter’s Square, The Colonnade - It took eleven years of work (1656-1667), with more than 40 thousand cubic meters of travertine transported from Tivoli by land or pulled by horses along the banks of the river: with its colonnaded arcades, this famous square symbolizes the Church’s universal embrace towards believers but also towards “heretics [...] and agnostics to enlighten them with the true faith”. In designing the colonnade, Gian Lorenzo Bernini played with optical games, with a spectacular result. Crossing the square, the columns will seem to approach and move away, creating movement and a series of full and empty spaces. Looking at the colonnade from the center of the square, at the point indicated by one of the two stone discs on the pavement that mark the focal points of the ellipse, it will instead seem to consist of a single row of columns: the outermost columns will disappear behind those of the internal row.

#4 Trinità dei Monti Convent, refectory and anamorphosis - A friar, architect and theorist of perspective, Andrea Pozzo frescoed the refectory in 1694 with the “Wedding at Cana”, creating a trompe-l’œil painting of a hundred-column palace and a theatrical and engaging scene. The corridors of the convent host the “anamorphosis” by Emmanuel Maignan (1601-1676) and Jean-François Niceron (1613-1646), painters-scientists of the order of the Minimum Fathers. Derived from the Greek word meaning “to transform”, anamorphosis is a distorted image, recognizable only from a precise angle. Thus, if viewed from a different angle, the seascape painted by Maignan (and about six meters long) becomes the immense figure of Saint Francis of Paola (the founder of the order). In the anamorphosis by Niceron, about twenty meters long, Saint John the Evangelist dissolves in turn into the panorama of the Greek island of Patmos, where the apostle spent part of his life. A braided scroll reminds us that “citra dolum fallimur”, we are deceived but without malice.

#5 Church of Sant’Ignazio di Loyola, vault and fake dome - The church is home to two spectacular optical illusions signed, also in this case, by Andrea Pozzo. In the large fresco of the vault with the Glory of Saint Ignatius, Pozzo creates an optical illusion that gives the impression of an infinite space, offering our eyes the illusion of a second three-dimensional church resting on the real one. And this is not all: moving towards the main altar and stopping on a specific point of the floor, we’ll see a tall, ribbed and coffered dome. The ceiling, however, is actually flat, and the dome is painted on a 13-meter canvas using the trompe-l’œil technique, it is said to prevent the church from remaining incomplete due to lack of funds. The original painting, completed in 1685, was destroyed by a fire but was faithfully reproduced in 1823.

#6 Church of Santa Maria Maddalena in Campo Marzio, Sacristy - In a small church rebuilt between the end of the 17th and the beginning of the 18th century by various architects, including Carlo Fontana and Giuseppe Sardi, a profusion of paintings, swirls and gilding makes the Sacristy a unique example of the “barocchetto romano” style that marks the transition from Baroque to Rococo. As in a large theatrical setting, each element creates an illusion of depth: using the central perspective, the author creates a fake architecture with a central vault and two arched windows on the sides, towards which all the lines converge in a vanishing point placed behind a wooden crucifix. Only two columns in relief emerge from the painted background, reinforcing the illusion of depth. Worth of note is the alternating sequence of wooden furniture with faux marbling and the trompe-l’œil windows on the right wall.

#7 Baths of Diocletian, Fercoldo - Among the many wonders of the Baths of Diocletian, a lesser-known masterpiece is the wonderful trompe-l’œil painting in the courtyard of Michelangelo’s cloister, and realized  in 1855 by Filippo Balbi, a Neapolitan artist. A Carthusian monk comes out from a fake door: his name is Fercoldo and he was a 13th-century well-known French lawyer and judge who chose monastic life after the death of his wife. Painted in full size, he peers at us with a penetrating gaze, pointing his finger at the portrait of his son, Pope Clement IV. Around him are objects of absolute truthfulness and daily utility, a skull and a crucifix, an hourglass, a rosary, a candle, nibs and an inkwell, books and a pair of “pince-nez” glasses. To top it all off, there’s a crouching kitten looking at the monk in a further perspective game of looks. 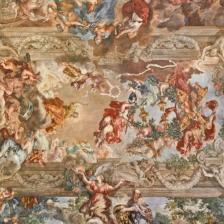 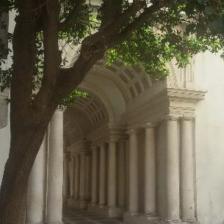 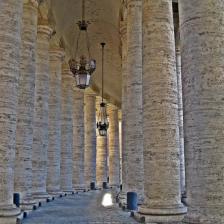 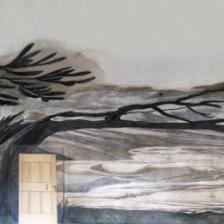 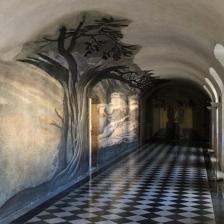 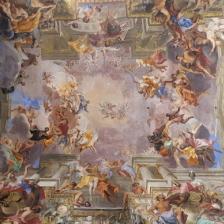 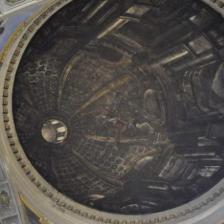 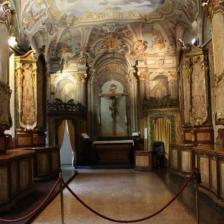 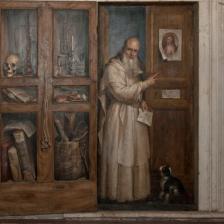