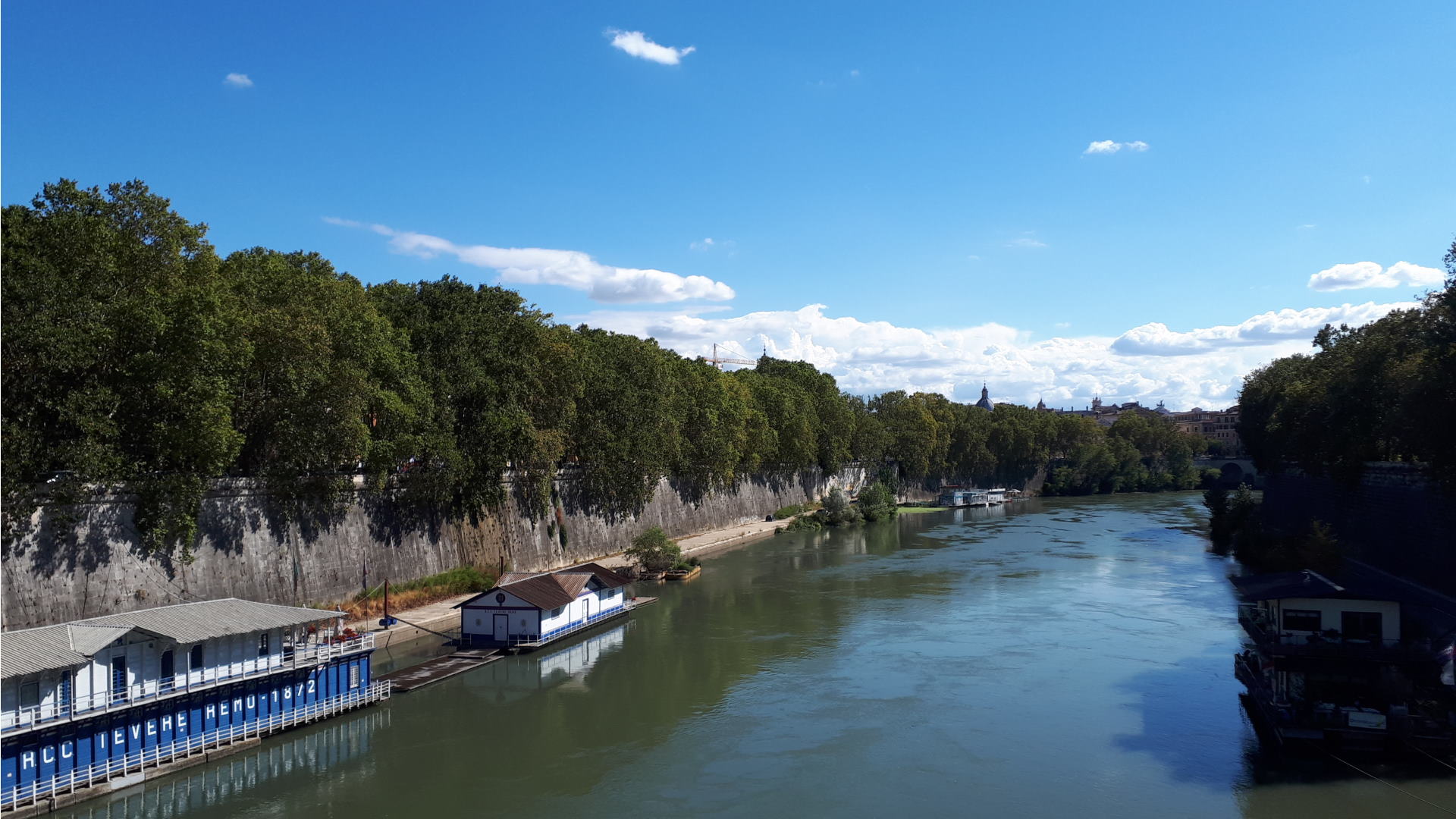 A river of activities

Just until a couple of centuries ago, the calm river flowing through the city was teeming with life and served as a livelihood for boatmen and fishermen, sailors, ferrymen or “barcaroli”, ship builders, dyers, water carriers, “renaioli” or sand diggers…  The list could go on and, although it might seem strange to us, millers were among the most familiar figures along the river’s banks. Ship mills were once a common sight on the Tiber: Romans called them “molini” or “mole” and they were so many to be the popular subject of drawings, paintings and maps. In the early 15th century, a Spanish traveler visiting Rome wrote that the two banks of the Tiber almost seemed to join because of their large number. The biggest and most famous ship mill was the so-called “Mola dei Fiorentini”: it was named after the church of San Giovanni dei Fiorentini at the beginning of Via Giulia and today a little street still takes its name from it. However, the majority of ship mills were near the Tiber Island. Not by chance one of its bridges, the Pons Cestius, was once nicknamed “Ponte Ferrato”, Iron Bridge, because of the tangles of iron chains that surrounded it and that were were used to anchor the floating mills on that branch of the river.

The history of the mills on the Tiber began in 537 AD, when Vitiges and the Goths besieging Rome cut the aqueducts that delivered water to the city, including the Aqua Traiana that powered the mills on the slopes of the Janiculum hill. However, the Byzantyne general Belisarius, then in charge of defending the city, came up with the luminous idea of ​​moving the milling activity to the Tiber, close to the Sixtus Bridge, and the idea had lasting effects: since then and for more than 1,300 years, the mills played a key role in the economy of the city, guaranteeing the flour for Rome’s daily bread, the staple food resource – when not the only one – of most of the population. Their working principle was so simple as was their structure: they were composed of two hulls with a water wheel in between, moored to the banks by long chains. The smaller hut was called “barchetto”, small boat; the wider hull was always on the side of the river bank and housed the milling machinery (mill stones and gears) inside the characteristic “casetta”, small house, often with a cross on the top. The mills would be run by a staff of as little as four, in addition to the “molinaro”, owner of the mill: two “caricatori” loading and unloading the heavy bags of grain and flour; one “servitore” who would actually work on the boat and one “garzone”, an assistant.

A curse and a blessing

Loved and lived but also spiteful and restless, the Tiber has played a crucial role in Rome’s development but was also a torment. With its periodic overflows it flooded the lower areas of the city, causing extensive damage, often followed by major epidemics caused by mud, slime and stagnant waters. And the ship mills worsened the situation, as they were an unpredictable source of danger, in short, into real loose mines. When a heavy rainfall swelled the river, the strength of the current used to break the moorings: dragged at the mercy of the currents, the mills wedged in the arches of the bridges damming the river, or overwhelming the boats of the ancient river port of Ripa Grande or the Papal Arsenal, not far from Porta Portese. Still in 1826, the mills in operation were 27, each of which grinded almost five tons of wheat a day. What wiped them out, in a material and figurative sense, was not the spread of new technologies but a flood: after the terrible flood of December 1870, when three mills were washed away, and the successive construction of the embankment the Tiber mills definitively disappeared. This was the end of their centuries-old history.

Today, to discover what remains of the ancient ship mills, all that remains is to go to the Tiber Island and enter the Basilica of San Bartolomeo all’Isola, founded in 997 by Otto III on the ruins of the ancient Temple of Aesculapius. The last chapel on the left, at the end of the church nave, was from 1626 the religious see of the important and powerful Romana Molendinariorum millers’ corporation, or Università dei Molinari, known for the strict selection criteria of the aspiring members. Its decorations recall and celebrate the activity of the Roman millers, giving us back with frescoes and engravings the unique images of the wooden ship mills that dotted the Tiber. 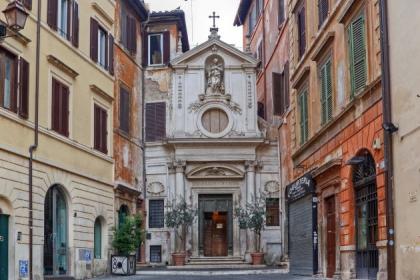 Rediscovering ancient arts and craft, stories and traditions with the guild churches

Stories and legends of the tower on the island
TAG
Curiosità