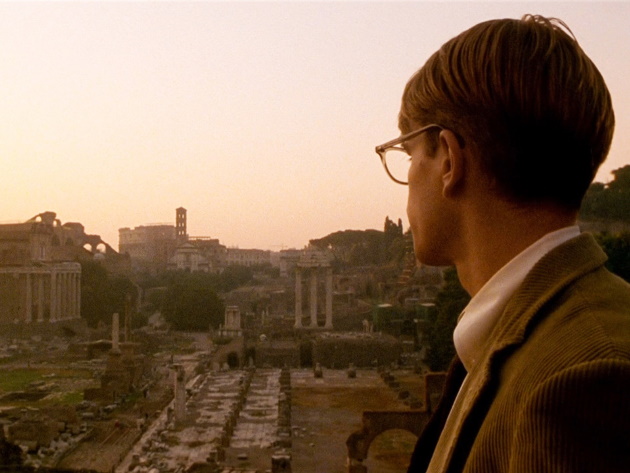 The special day we are talking about is 6 May 1938: Adolf Hitler is coming to Rome. While Antonietta remains at home, her husband, a convinced fascist, drags their six children to see the Duce meet the Führer.

The monumental Palazzo Federici, construction of the fascist era, is almost empty. Only Antonietta and Gabriele, a former EIAR radio presenter fired and destined for confinement in Sardinia because of his homosexuality, are inside. Antonietta's Indian blackbird escapes from its cage and rests on Gabriele's windowsill. The two meet when he is thinking of killing himself. A providential encounter that saves him from his suicidal intentions and her from her flat and ordinary life.

The first sequence shot of the film, which brings the viewer into Antonietta's house and life that is always the same, made of mountains of clothes to fold and of children and husband to look after, is among the longest in the history of Italian cinema.

In her autobiographical book, Sophia Loren describes in a moving way the meeting between the two protagonists: "It takes very little to meet, an Indian blackbird that escapes from your balcony, just dare higher on the terrace, between the sheets drying in the sun, to illuminate a faded sky with new colors ".

Carlo Verdone’s debut film as a director, in which he also plays several memorable characters grappling with a semi-deserted Rome oppressed by the August sun.

He is Leo, a clumsy, naive, and succubus boy of his mother who is waiting for him in Ladispoli to spend the August 15th. As he returns home to pack his bags, he meets a pretty Spanish tourist in trouble who convinces him to accompany her on a tour of the city.
In the evening at home, Leo organizes a romantic dinner, imagining his first sentimental adventure.

He is Ruggero, a blond boy with flowing hair and characteristic speech, a hippie who lives isolated in a commune in Umbria. As soon as he sets foot in Rome to raise funds for the commune, he is intercepted by his father, who convinces him to go home. Ruggero's father will do everything to persuade him to undertake a "normal" existence.

The night before the film's first clapperboard, Verdone's anxiety was skyrocketing. So, it was that the great director and creator of spaghetti western Sergio Leone who, to ease the tension, knocked on his door and said: "Let's go walking!".

The appointment at noon "ar Palo della morte" (death post) is a must for the fans of the film, who meet in this location every 15 August with ballpoint pens and nylon stockings, to take a photo to post on the Facebook page dedicated to the movie.

#9 THE MARQUIS OF GRILLO

In the early 19th-century Rome, threatened by Napoleon's army, Alberto Sordi takes the role of the Marquis Onofrio del Grillo, Duke of Bracciano, Marquis of Santa Cristina and count of Portula, noble guard and secret waiter of his Holiness Pius VII.

A mocking and vicious man, who does everything except carrying out his commitments, spends time between taverns and inns or with his lovers. But his favorite pastime, for which he is famous throughout the city, is to make incredible jokes, sometimes even cruel, to fill the void of his days.
Among his favorite victims are his family, the people, and the poor Pope, played by a great Paolo Stoppa, winner of the Nastro d'Argento for his interpretation.

The chance encounter with a poor alcoholic charcoal man, Gasperino, who looks exactly like him, starts a high comic rate series of situations.

A Marquis Onofrio del Grillo existed. He was a nobleman who held the same positions as in the film. But he lived between 1714 and 1787, earlier than the period in which the film takes place. According to the popular anecdotes, once existed an aristocrat from the del Grillo family who loved to play pranks on poor people. But it is not historically verified. Probably, Monicelli's Marquis del Grillo is a synthesis of the two characters adapted to the narration.

#10 THE BELLY OF AN ARCHITECT

During his career, the whimsical British director Peter Greenaway has always realized very particular works from the narrative point of view, with obsessive leitmotifs and intimately linked to the world of art.

The belly of an architect, telling the story of the American architect Stourley Kracklite, is no exception. The film is set during his nine-month stay in Rome for the organization of an exhibition on Etienne-Louis Boullée, an 18th-century French architect to whom he feels an immense passion that borders on obsession.

Throughout this period, a child grows in the womb of his wife, in his perhaps a tumor. For the protagonist, therefore, begins a descending parable made of fixations and follies that culminates in the painful and grotesque ending.

The hallucinated perspective of the story perfectly aligns with Boullée's visionary trend: his unusual projects never saw the light.

The image of the belly is one of the common threads of the whole story. Anguished by the presumed presence of the tumor, Kracklite surrounds himself with photocopies and enlargements of graphic reproductions of different bellies, intervening on them to circumscribe the painful area and understand the extent of his pains. Among the many, the chosen belly is that of Andrea Doria as Neptune (1550-1555) by Bronzino, now preserved in the Pinacoteca di Brera.

Numerous artistic and architectural references run the film throughout its duration. Silent witnesses, of course, but signifiers of the symbolic universe that Greenway binds with the evolution of the physical, moral, and professional decline of its protagonist.

Locations:
Stadio dei Marmi
The Palace of the Italian Civilization
Capitoline Museums – Conservatori Palace
The Pantheon
The Vittoriano
The Mausoleum of Augustus

"Dear diary, there is one thing I like to do the most!".

Thus begins, on the engaging notes of Batonga, Nanni Moretti's homage to his Rome. Riding his '75 blue 125 GTR Vespa, in the semi-deserted city of August, the director takes us on a tour of the neighborhoods and streets he loves.

The landscape and the architectural and monumental beauties of the Capital are the backgrounds to the thoughts of the protagonist, that range from film criticism, in particular the Hollywood one, to sociology, and the urban planning, peculiar to some neighborhoods, including Garbatella and Spinaceto, a district south of Rome.

The itinerary ends at the Idroscalo di Ostia, in the place where Pier Paolo Pasolini was killed, in front of the monument erected in his memory.

Nanni Moretti spent his childhood and attended schools in the Prati district. Here, he also shot his first films I Am Self Sufficient (1976) and Ecce Bombo (1978), the movies that made him famous.

One of the most touching scenes of In Vespa is the one shot at the Idroscalo in Ostia, the only neighborhood in Rome by the sea. Moretti pays tribute to the great poet and director Pier Paolo Pasolini, by visiting the monument to his memory. The monument is a neglected contemporary concrete sculpture on an isolated and run-down area that today is reclaimed land and an ecological oasis.

Tom Ripley's talent, the protagonist of Minghella's acclaimed and award-winning film, is the art of deception that leads him to commit deplorable acts, rather than being a nobody. He is a nice, cultured, refined, and polite young American boy. But it's all a lie. He is a Zelig of modest origins who tries to hide his social background at any cost.

Tom is impressed by the high society sparkling look and tries to introduce himself to the rich young people to live at their expenses. He soon understands, however, how frail, broken, and transitory everything is, even friendships. To get out of the dangerous situations he is in, after assuming the identity of one of his friends, he must improvise continuing to pretend. And he does it without remorse or shame, embarking on a reckless training path, always with a smile on his face.

To shoot the film, Jude Law had to learn to play the saxophone, while Matt Damon to recreate the right sequence on the piano. The music you listen to in the movie is performed by professional musicians.

The talented Mr. Ripley is freely adapted from the novel of the same name written by Patricia Highsmith in 1955. The book is the first of a series in which Tom Ripley appears. He also returns in Ripley Under Ground, Ripley's Game, The Boy Who Followed Ripley, and Ripley Under Water.