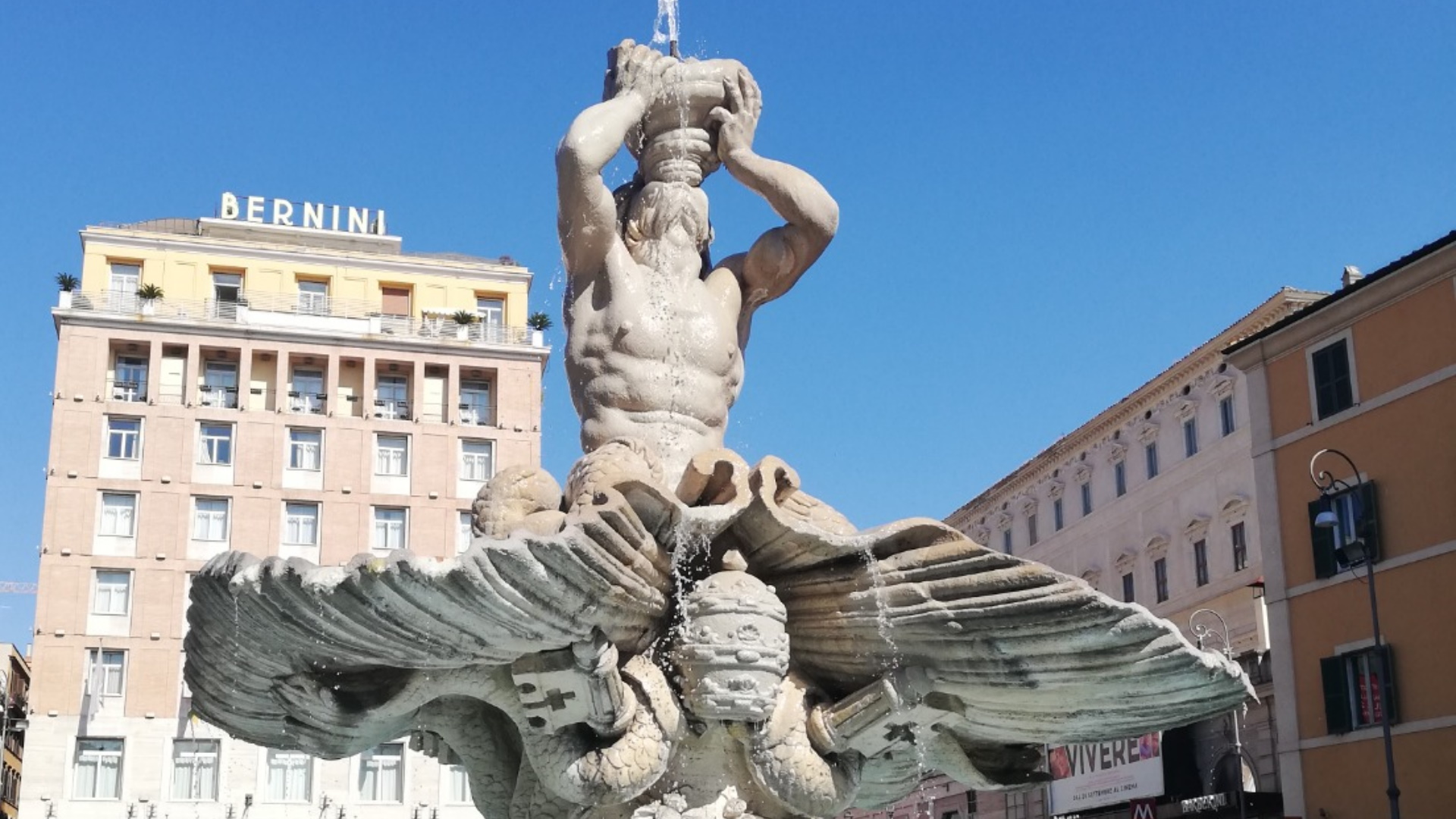 The splendid Triton Fountain, a masterpiece by Gian Lorenzo Bernini, was built between the end of 1642 and the first half of 1643 on behalf of Pope Urban VIII Barberini. He wanted a " public ornament for the city " and also a utility service to place in the center of the square dominated by the brand-new palace belonging to his family.

Powered by a branch of the Felice Aqueduct, which passed in the immediate vicinity, the Triton fountain is an expression of the new Baroque conception of space: its sculptural part includes and completely absorbs its architectural structure. The four dolphins with intertwined tails, between which are placed the papal coats of arms with bees, the heraldic symbol of the Barberini family, support a large shell, from which the Triton rises imposingly. The colossal statue is represented with an erect torso, scaly legs, and head bent back to blow into the large buccina (spiral shell) that he supports in his hands and from which the water gushes and irrigates the whole work. The first innovation introduced by Bernini is that, unlike the traditional newts normally depicted with monstrous connotations, his has a more human aspect.

The symbols included in the Triton Fountain celebrate the Barberini Family to which Pope Urban VIII belonged.

The bees are the heraldic symbol of the family and allude to the triumph of Divine Providence. The dolphins, benevolent animals par excellence, represent the acts of charity carried out by the Barberini. In classical mythology, Triton, son of Amphitrite and Poseidon, whose name means " roaring ", announced, strongly blowing from his shell-shaped horn, Poseidon's arrival. Here, in all probability, he proclaims to the world the power of the Pontiff.

The second innovation Bernini introduced by this beautiful fountain is the use, for the first time ever, of the expedient of the hollow base of the sculptural group, which did not rest on a central pillar but on a structure with a void in the center, to supply higher momentum and elegance to the composition. Amplified in dimensions, you can admire the same stratagem in the Fountain of the Four Rivers in Piazza Navona.

Over time, the Triton Fountain has undergone various restoration interventions. That of 1932 is all to be told. With no small effort, the restorers managed to bring out the original fountain from about 12 cm of incrustations deposited on it over the centuries. After the restoration, it looked so different that the citizens were convinced that the statue had been replaced by a copy. They were so furious as to unleash a press campaign to restore the previous look of the fountain. The most recent restorations were carried out in 1987-1988, in 1990, and in 2013.

Bernini himself was also the author of a fountain for the use of travelers. Known as the Fountain of the Bees, and originally located on Piazza Barberini at the corner with Via Sistina, today you can admire a copy of it at the beginning of Via Veneto.