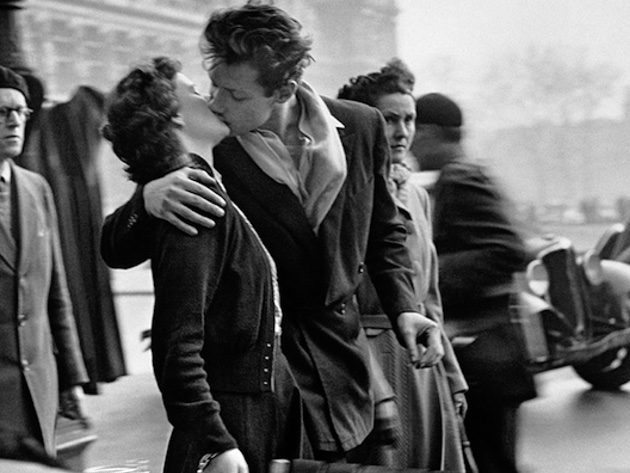 The exhibition at the Ara Pacis, dedicated to the great master of photography Robert Doisneau, presents over 130 black and white shots from the collection of the Atelier Robert Doisneau in Montrouge, through which we retrace his long career.

Considered by critics one of the founding fathers of French humanist photography and street photojournalism together with Henri Cartier-Bresson, Doisneau was able to immortalize the daily life of the Paris neighborhoods and the feelings of the people who lived there, in the long period from the beginning of the 1930s to the late 1950s.

The main feature of his shots is an approach to photography that highlights the emotions of the subjects portrayed, taken by surprise and therefore unaware: they are citizens, workers, children who play and populate the streets of Paris, described in the fervor of the life of every day, to bring out the truth, sometimes even with irony, but always naturally. Emblematic in this regard is his best known work, the Kiss in front of the hotel De Ville from 1950, which portrays a couple  kissing along the crowded Parisian streets. The couple, however, was not portrayed by chance: Doisneau was doing a photo shoot for the US magazine Life, and asked the two young people to pose for him.

Born in 1912 in Gentilly, a suburb of Paris, as a young man he studied lithography at the Ecole Etienne and, in 1929, he began working for the advertising photographer André Vigneau and then, at the beginning of the 1930s, he switched to industrial photography working for Renault. In this period he began to photograph in the Parisian suburbs with to sell his shots to photography magazines that in those years were beginning to expand. With the outbreak of the Second World War, Doisneau temporarily interrupted his activities as a photographer and joined the Resistance, making his skills as a lithographer available to falsify documents. With the end of the war, he starts taking pictures again for advertising purposes, and also makes some reportages for Vogue magazine. In 1949 he published his first book of photographs “La Banlieu de Paris”, the first of a long series. In the 1950s he became a member of "Group XV", an association of photographers dedicated to technical and artistic research in the photographic field, continuing his activity to the end.