The Palio of Ostia Antica 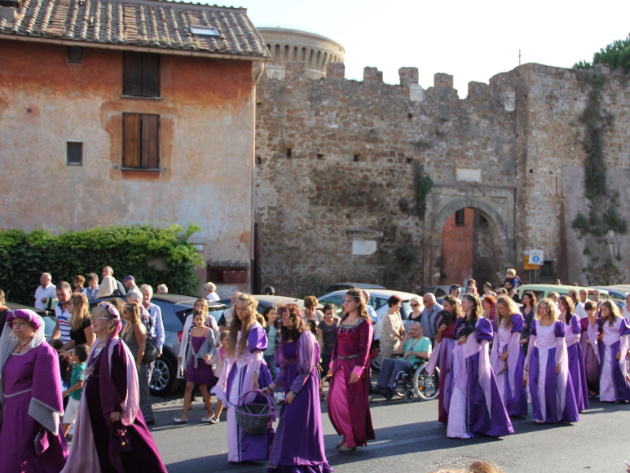 The following events are scheduled for the 2022 Palio di Ostia Antica.

Saturday, 21 May
Stella Polare Stadium in Ostia, 4 p.m.: Demonstration of match Palla col Bracciale, a game of agility and skill in vogue during the Renaissance. It is the ancestor of tennis.
Novelty of 2022.

Saturday, 25 June
Castle of Julius II Ostia Antica, 4:30 p.m.: Disfida della Rocca, a challenge between the Contrade.
The winning Contrada is awarded with the "Palietto."

Saturday, 23 July
Piazza Anco Marzio and surrounding areas, at 9:30 p.m.: Historical parade "under the stars" with figurants and flag-wavers.

Sunday, 25 September
Saturday's exhibitions continue, with entertainment by the Figuranti del Palio in and around the Borgo in the morning.
In the afternoon, in Viale dei Romagnoli, at 4 p.m.: Historical procession of the Palio figurants with flag-wavers.
At the Maneggio Roma, via di Pianabella, at 5:30 p.m.: Knightly Tournament between the riders of the Contrade.
The winning Knight allows his Contrada to win the coveted prize: "The Palio 2022."
6:45 p.m.: Award ceremony with the presentation of the "Palio 2022" banner to the winning Contrada.
9 p.m.: at "Al Bajniero" Restaurant in Ostia Antica. Palio di Ostia Antica lottery drawing.

The history of the Palio of Ostia Antica

A jewel among Rome's jewels, Borgo di Ostia Antica is a delightful center nearby the sea. Its maximum development dates back to the Renaissance when Giuliano della Rovere was elected Cardinal Dean Bishop of Ostia in 1482 and then Pope Julius II in 1503. Thanks to him, the Castle bearing his name was enlarged, and the Church of Santa Aurea, the burial place of Santa Monica, mother of Sant'Agostino, was rebuilt.

In the shadow of these two prestigious testimonies of the past, the Palio di Ostia Antica, a costumed re-enactment in a modern key of a Renaissance Palio, takes place every year. Even if is no evidence of an ancient Palio, Ostia Antica one has been redesigned on a historical basis and with scientific rigor according to the customs and traditions of the time, plus a bit of imagination.

Since then, the Palio d’Estate and the Palio d’Autunno have been celebrated twice a year.

The Palio d’Estate is commemorated on the closest Saturday to the summer solstice falling in June; the trophy, which takes the name of Palietto, is awarded after the dispute between the contrade. During the Palio d'Estate, an evocative nocturnal historical parade also takes place under the lights of the lanterns.

The Palio d’Autunno is spread over two days, the closest to the autumn equinox weekend of September. The trophy is assigned to the Contrada to which the winning knight of the Knightly Tournament belongs. It is called Palio and can be awarded after he participates in the three elimination steps of the competition: the skill and ability competition, the Giostra della Quintana, and the Lizza, the last test in which the two knights who stood out in the two previous races face off. The autumn event is characterized by the Historical Parade, which, from the center of Ostia Antica, reaches the competition field.

The Contrade are currently six, three historical, and three territorial:

Borgo: a historic district, the emblem of which, is the Mastio della Rocca in the Renaissance guise reworked by Pope Julius II. Its colors are crimson-red and gold. Its motto is Vis unita fortior (unity is strength).

Castello: a historic district, the symbol of which, is the Rocca di Ostia. It later became a castle thanks to Cardinal Giuliano della Rovere, future Pope Julius II. Its colors are white, gold, and green. Its motto is Nobilitas et Virtus (nobility and virtue).

Gregoriopoli: a historical district embodying the fortified citadel commissioned by Pope Gregory IV in the 9th century as a defense against Saracen raids. It was enlarged and embellished during the Renaissance with the construction of the bishop's seat (Episcopio) next to the church of Santa Aurea. The entrance arch to the citadel, which can still be admired today, is depicted in the district banner. Its colors are black and gold. Its motto is Castrum Fidei (fortress of faith), a place for authority (a stronghold) and perfection (faith).

Longarina: a territorial district located within the pine forest of Castelfusano. In its territory are numerous Eucalyptus trees planted by the Ravenna people at the end of the 19th century to allow water to be absorbed after the reclamation of the area. On its flag, you can see the Moon and the Sun. Its colors are scarlet-red and silver. Its motto is Sufficit Animus (courage is enough).

Stagni: a territorial district near Ostia Antica. Formerly, the sea, a pond, and the Tiber surrounded the area. At the end of the 19th century, the marshy area was reclaimed by the people of Ravenna and populated. Its colors are green and gold. Its coat of arms reproduces the head of a horse and a frog. Its motto is Memento Audere Semper (remember to always dare).

When
from 21 May 2022 to 25 September 2022
Contacts
Facebook:
www.facebook.com/A.C.PALIOOSTIAANTICA
Web site:
www.paliodiostiantica.it