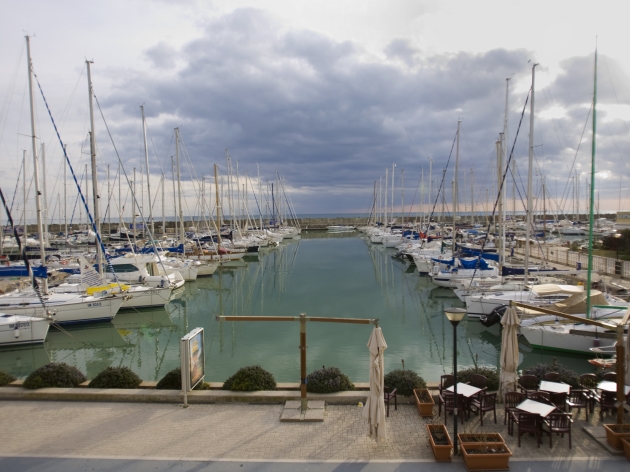 The history of the area as a port city has ancient origins; its sense and significance can be found in relation to the nearby city of Rome. The outlet of the Tiber’s route in the Tyrrhenian sea was a crucial factor for the birth of the first maritime colony, Ostia Antica.

The Port of Claudius, built on an artificial lake, had a round shape and at least two canals ensured the connection between the sea and the Tiber. Now the port of Claudius is not visible any more, but, when you are at Fiumicino airport, remember that it is right under your feet. Moreover, it was just the first port. The lack of security and the gradual silting of the port induced the Emperor Trajan, just 40 years later, to built a new inner and safer basin, with a hexagonal shape, digging and lengthening the canal of communication between the port and the river, that is the current ‘Canale di Fiumicino’, thus forming an artificial island later called ‘Isola Sacra’.

The island, at the time of the Romans, was about one third of the current size…Would you like to visit it? If you want you can experience a horse-riding on the ‘Isola Sacra’ by contacting the ‘Tevere Time Horse Club’. Getting back to what we were talking about... The port of Trajan ensures therefore to the city of Rome the benefits coming from the sea trade going up the Tiber.

Today also you are given the chance to navigate on the Tiber embarking on the mini-cruises that, sailing from Ostia Antica, will take you to the heart of the city of Rome on the old trade routes. But are you walking to the Port of Ostia? Certainly you will not see the things we have just told you. In fact, in the modern age the project for the new marina goes through different stages closely related to the reclamation works that affected the area since the end of the nineteenth century.

Already in 1875 Giuseppe Garibaldi suggested the construction of a commercial port in Fiumicino; in 1904 the ‘Comitato pro Roma marittima’ was founded, promoted by the engineer Paolo Orlando, whose program included the realization of the port of Ostia.

In 1926 the seaplane base was built, but no work was realized for the port of Ostia, only great projects. We’ll have to wait until the ‘90s to see realized what there is today. Have you arrived? Well, this is the new marina or ‘Porto Turistico’ of Rome. You can take a stroll on the covered walk among shops, cafés and ice-cream parlours.

If you have a scuba diver certification you can book an excursion to the Marine Protected Area of the Shallows of Tor Paterno at one of the diving centers. If you are a naturalist, behind the Port of Rome you can experience birdwatching in the CHM-LIPU Natural Oasis. You’ll definitely plan to return to Rome, right? I’ll wait for you on the coast to observe together how the waterfront of Ostia will be changed.