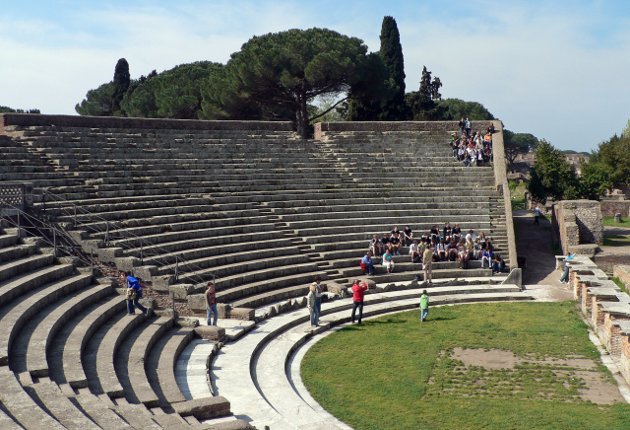 In your experience in the territory of Ostia you cannot miss to visit the Parco Archeologico di Ostia Antica, one of the largest archeological sites of ancient Rome. The colony was founded between the end of the fifth century and the beginning of the fourth century BC as a ‘castrum’, a rectangular fortified citadel. Initially, it served as a naval base under the control of a Roman quaestor and then, from the second century, because of its increasing importance for trade and for the food supply of Rome, it began to expand.

Under the Emperor Augustus and his successors, the city was provided with a theatre, a first forum and an aqueduct, but it was the construction of the port of Claudius, and especially that of the port of Trajan, which further increased its importance as an administrative center for trade. After the middle of the third century, the city began to decline as a result of its gradual moving away from the coast and the silting up of the river, that was no longer navigable.

The first excavations of Ostia were undertaken under Pope Pius VII at the beginning of the nineteenth century, continued under Pius IX and after the Unification continuous researches, carried out in view of the Universal Exhibition of 1942, brought to light an area of 34 hectares against the 50 hectares that were probably built in ancient times. Today excavations are located close to the town of Ostia Antica. For a more detailed description of the excavations, paper guides are available at the ticket office.

Not far away you can visit the beautiful and picturesque village: entering the ancient door you will find yourself immersed in an atmosphere of past times. On the little square you will find the church on one side, and, on the opposite side, the castle of Julius II and the old town in all its splendor, built in the ninth century by Gregory IV to give shelter the workers employed in the salters. It was this pope who started the fortification of the settlement.

We owe the layout of the castle to Giulio della Rovere, who had it built when he was still a cardinal. The work was carried out by the Florentine Baccio Pontelli, as you can read in an inscription above the portal. The path of the Tiber influenced the realization of the village and the triangular shape of the layout of the fortress. The building was used for different purposes: as a flood control point and with military-strategic and residential functions.

This last function will influence the other ones, and, along with the change of the territory, will gradually put an end to the customs function of the castle in favor of the Boacciana tower. In fact, after a dreadful flood in 1557, the Tiber was diverted and the moat became dry. Internally, the building presented itself with a monumental staircase consisting of three flights, with vaults and walls decorated by artists from the school of Baldassarre Peruzzi. Later pontiffs intervened only with routine maintenance works until 1736, when Pius VI included the restoration of the fortress in a more organic plan that was connected to the reclaim plan for the exploitation of the salters.

Closed on Mondays, January 1st, May 1st and December 25th.