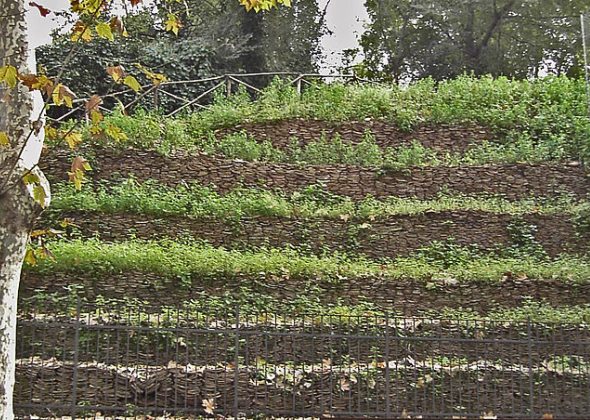 The mountain, 54 meters high and with a circumference of about 1 kilometre, was a real "landfill" of the Roman age, where, over time, millions of Testae (shards) systematically dumped and accumulated, mainly fragments of amphorae used for the transport of unloaded goods in the nearby river port on the Tiber.

The fragments were stacked with maximum space-saving, using lime to eliminate the inconveniences caused by the decomposition of the oil. Such an accumulation, both in quantity and in height, was possible thanks to a first ramp and two narrow streets crossed by the wagons.

Many fragments and amphorae retain the mark imprinted on one of the handles, while others have the tituli picti, notes written with a brush or calamus with the name of the exporter, indications on the content, the checks performed during the trip and the consular date.

From the Middle Ages, when the landfill function ended, Monte Testaccio became the site of popular events, from ancient public games, such as the ludus Testacie - a sort of bullfight - to the well-known "Ottobrate Romane" of the 19th century - closing celebrations of the grape harvest.

In the following centuries, at the base of the hill, caves were dug, used as cellars and stables (the so-called "grottini"), which have now become restaurants and disco-pubs that animate Rome's nightlife.

Open to organized groups by reservation only.
Max. 30 people per group.
Closed: Monday, January 1, May 1, December 25.

Open to single visitors without guided tour on Wednesday 10 November. Reservation required at 060608