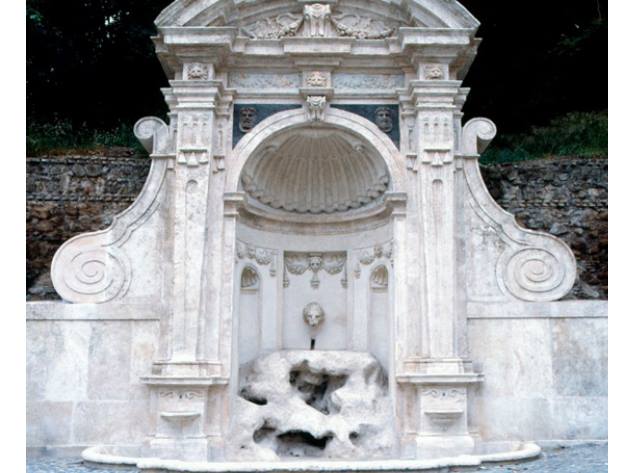 Located in via Goffredo Mameli, on the slopes of the Janiculum Hill, the ancient Fountain of the Prisoner was built in 1587-1590, as an ornament of the garden of Villa Montalto Peretti, an imposing residence on the Esquiline hill designed by Domenico Fontana for Pope Sixtus V.

When, in 1887, the magnificent villa was demolished for the construction of Termini Station and the new residential districts, the following year the fountain was purchased by the Municipality of Rome. It was dismantled and stored, and then rebuilt in 1894-95 as the background of Via Genova, one of the new urban development streets near via Nazionale. In 1923, the work was dismantled again, then reassembled in its current position, based on a project by the Genio Civile (Civil Engineering).

The name "Fontana del Prigione" originates from the sculpture of a prisoner with his hands tied, part of the sculptural group, including the statues of Apollo and Venus on its sides, placed inside the central niche and now lost.

The fountain essentially keeps its original appearance, consisting of a large niche framed by two pilasters and decorated with garlands of flowers and fruit in relief and leonine protomes, a reference to the heraldic insignia of Pope Sixtus V. In the centre, a lion's head pours the water in the large lower basin and, at the base of the pilasters, two other small basins collect the water that flows from two spouts. A large shell valve is the vault of the niche, surmounted by a curved tympanum dominated by a headless statue of Aesculapius, flanked by two decorated vases.