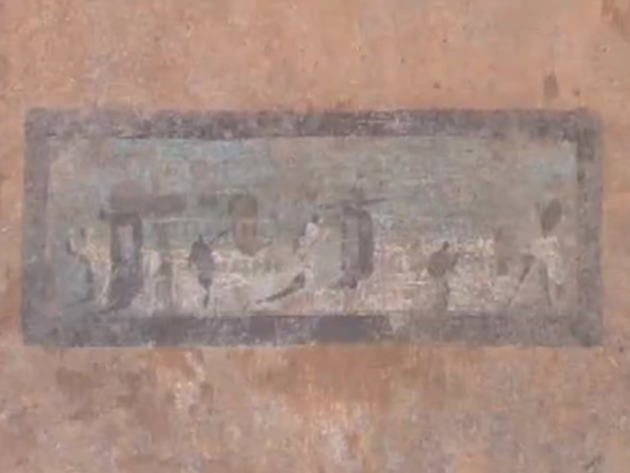 In 1959, during the works for the construction of the new INPS headquarters,  came to light the remains of an archaeological complex, the structures of which have been traced back to three different construction phases, over a period of time ranging from the 1st to the 4th century AD.

The most ancient structures, in reticulated work, have returned elegant frescoes that in some cases recall the decorations of the Vesuvian villas. The most important remains, however, consist of a large corridor, of which it was possible to excavate a section about 27 meters long, with large windows opening perhaps towards a garden and a cycle of frescoes, dated to the fourth century AD, depicting characters greater in dimensions (a so-called megalography). The corridor ends at one end in an exedra, also with windows, with an oval pedestal in the center. A hypothetical reconstruction of the monumental complex places the exedra in the center of a portico, which extended for 60 meters: the conformation of the ground and the subsequent discovery of a nymphaeum at the intersection with via dei Laterani, however, suggest a smaller structure.

According to some scholars, the most ancient remains belong to the Pisoni and Laterani domus, the rich residences of Calpurnio Pisone and Plauzio Laterano, protagonists of the antineronian conspiracy of 65 AD, expropriated during the reign of Nero. In the fourth century, the two houses would have been incorporated into the Domus Faustae, the residence of Flavia Maxima Fausta, wife of Emperor Constantine and sister of Maxentius. This theory is supported by the interpretation of the characters depicted on the frescoes in the corridor, as members of the Constantinian imperial family.

In addition to being rather damaged and missing some heads, the frescoes, however, do not present attributes that allow us to establish whether they are members of the imperial family or rather deities. Their dating is also uncertain and oscillates between the first years of the fourth century and the second quarter of the same century. The only certain thing, therefore, is that we have a high standard house of late ancient period, with a decidedly luxurious decoration.