Basilica of San Marco Evangelista at the Campidoglio 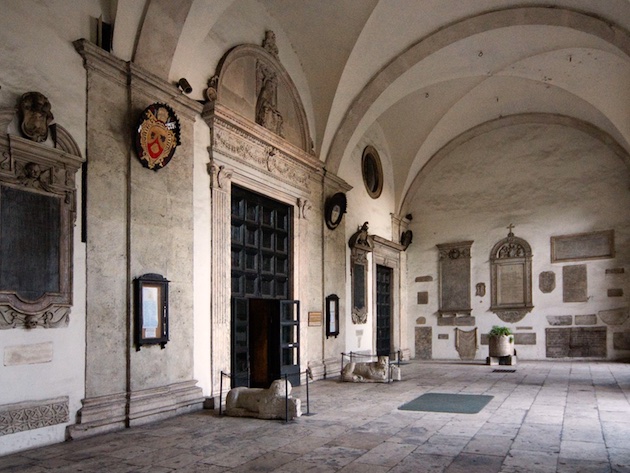 Incorporated in Palazzo Venezia, in front of the Vittoriano, the basilica of San Marco stands on the homonymous square. Its foundation, which dates back to the 4th century, is due to Pope Saint Marco. Restored several times over the centuries, it was rebuilt in its present form in 1468 by Pope Paul II, who made it the church of the Venetians in Rome.

The façade, formed by a portico with three arches with semi-columns leaning against pillars, is among the most elegant of the Renaissance period in Rome and, among many hypotheses, has been attributed to Leon Battista Alberti. Behind it stands the Romanesque bell tower with three-mullioned windows, decorated with ancient ceramics. During the restoration work, the bones of many martyrs were found in the basement of the first basilica, including those of San Marco, now under the main altar.

The interior, divided into three naves, although from the Baroque times, retains elements from various eras, such as the wonderful 9th-century apse mosaic representing Pope Gregory IV in the act of offering a model of the church to Christ.

Among the other works inside the church, worthy of mention are the 15th-century frescoes by Melozzo da Forlì, depicting Saint Mark the Pope and Saint Mark the Evangelist and the tomb of Leonardo Pesaro, from 1796, by Antonio Canova.