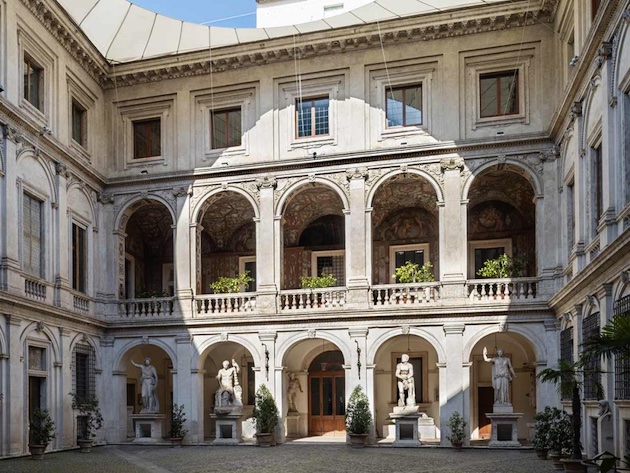 Altemps Palace is located near Piazza Navona and is one of the seats of the National Roman Museum. Erected in 1477 by Girolamo Riario, Duke of Imola and nephew of Pope Sixtus IV (1471-1484) on previous medieval buildings, including small terraced houses, towers and gardens, its construction was attended by Melozzo da Forlì, Luca Pacioli and maybe also by Leon Battista Alberti.

In 1511 the building was sold to Cardinal Francesco Soderini; in this period and also after the cardinal's death in 1524, the palace was renovated and became the home of Cardinal Innocenzo Cybo. Baldassarre Peruzzi is thought to have carried out some works during this period.

In 1568 the palace was purchased by Cardinal Marco Sittico Altemps, the son of the German count Wolfgang Hohenems (known as Altemps in Italy) and of Chiara Medici, sister of Pope Pius IV (1560-1565). Cardinal Marco Sittico made significant changes to the building between 1577 and 1595, the year of his death. These works were designed by Martino Longhi the Elder and he was responsible, among other things, for the roof terrace created in the corner towards Piazza Sant’Apollinare; this terrace was surmounted by four pyramidal spiers and covered by a dome surmounted by a rampant ram, symbol of the Altemps family.

Many great artists participated in the work, including Giacomo Della Porta, Flaminio Ponzio, Tommaso Schiratti, Girolamo Rainaldi and Onorio Longhi. At the beginning of the 17th century, Duke Giovanni Angelo Altemps, nephew of Cardinal Marco, built the chapel of Sant’Aniceto, the Goldoni theater, considered one of the oldest theaters in Rome, and the library. The chapel housed the relics of the martyr pope Aniceto (155-166 AD) which were found in the catacombs of San Calisto and granted by Pope Clement VIII in 1603; this is the only case of a pope buried in a private building. The chapel was decorated by Pomarancio and Ottavio Leoni.

In 1887 the building, which had become the property of the Holy See, housed the Pontifical Spanish College. In 1982 it was purchased by the Italian state and, after a long restoration, became the seat of the National Roman Museum, hosting what remained of the Altemps collection and other important collections of ancient works, such as the Boncompagni Ludovisi collection, the Mattei collection and the Del Drago Albani collection. The building has an L-shaped plan and has three floors: the first floor has simple framed windows, the second has architraved windows with balconies and the third has architraved windows; the building is crowned by a cornice and trusses. The façade on Piazza Sant’Apollinare has many corridor entrances, while the one on Via di Sant’Apollinare has the main entrance and rusticated cantonal structures. From this entrance you enter the courtyard with arcades that open on the entrance side and on the opposite side, closed by windows on the other two sides, and decorated with the Altemps and Orsini coats of arms. Some of the statues of the big Altemps collection are housed here.