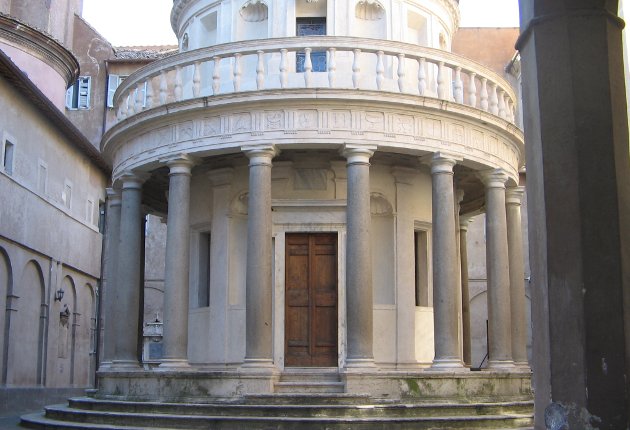 On the Janiculum hill, inside the complex of San Pietro in Montorio, there is this small architectural jewel, now part of the Royal Academy of Spain.

The Tempietto was built by Donato Bramante, presumably between 1502 and 1509, although the building was ordered by the Spanish royal family in fulfilment of a vow made for the birth of their first son who died prematurely in 1497.

Bramante designed a circular building with a dome, surrounded on the outside by 16 granite columns, a number recognized as perfect by Vitruvius. He also conceived it as a martyrium on the place where, according to tradition, Saint Peter would have been crucified.

The structure has a colonnade outside, resting on a short circular staircase, crowned by a balustrade from which rises the dome, partially modified by interventions during the 17th century.

The dome is certainly the most complex and extraordinary architectural element of the building; Bramante designed it, taking inspiration from the ancient Romans, in cement conglomerate and placed on a tambour decorated with pilasters.

The interior has small dimensions but appears much wider, thanks to the presence of high and deep niches, placed along the walls, four of which house small statues of the Evangelists; on the altar, there is the statue of Saint Peter, made by an unknown artist from the Lombard school of the 16th century.

The floor is entirely made with polychrome marble tiles, in the Cosmatesque style. Underneath the room is an unadorned crypt, where a plaque on the floor protects the hole that would have been left by Saint Peter's cross.