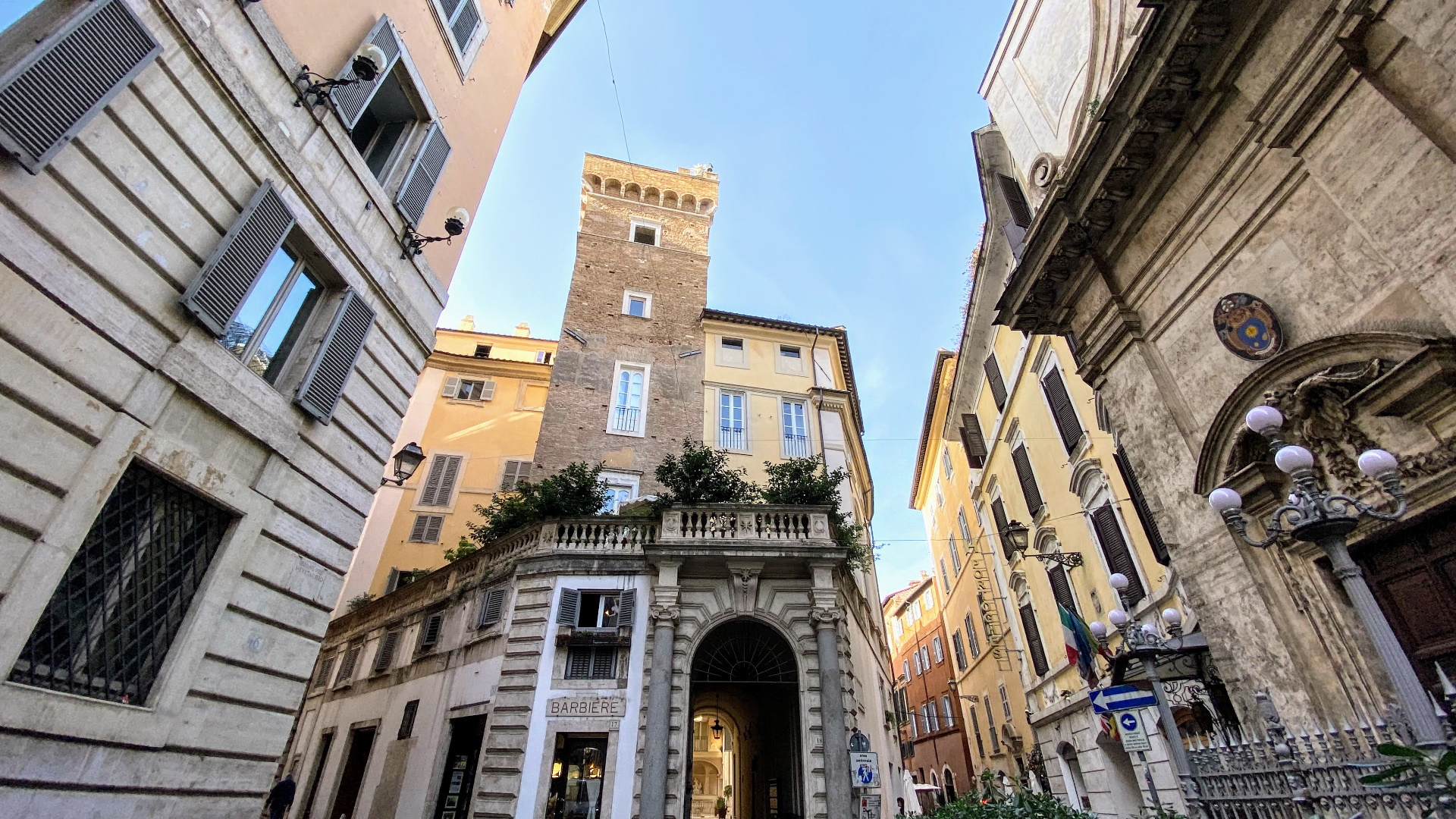 During the Middle Ages, the skyline of Rome was very different from the one we see today. The city profile was marked by the high bell towers of the churches and even more by the imposing towers built by noble and powerful families. There were at least 300 of them, so numerous, in a city that was, after all, relatively small at the time, that they seemed like “stalks of grain”, as English traveler Magister Gregorius wrote after visiting Rome in the mid-12th century.

Today about fifty towers remain, some clearly visible and quite famous, others camouflaged among the buildings that have leaned against them. We can find one in Via dei Portoghesi, close to the church of Sant’Antonio dei Portoghesi and a few steps from Piazza Navona. Its characteristic battlements were added in the 15th century but the tower, 4 floors high and covered with a brick curtain, dates back to several centuries earlier. Perhaps it was built by the Frangipane family and some says that this was the birthplace of St Oddone Frangipane in 1040. The tower with the adjacent building subsequently belonged to the Convent of Sant’Agostino, and then passed from the 16th to the 17th century to the Scapucci family. At the very end of the 1500s, during the expansion works of the building commissioned by Gaspare Scapucci, the tower was definitively incorporated into the building. On this occasion, the large ashlar portal of the ancient entrance was decorated with crescents and stars, the Scapucci’s heraldic symbol.

The tower thus maintained an important architectural function. Indeed, it ended up having its own fame regardless of the palace, due to a singular story that has the flavor of legend. The story is also told by the American novelist Nathaniel Hawthorne in his “French and Italian Notebooks” and then in “The Marble Faun”. According to the exotic fashion of the time, the family who lived in the building owned a pet monkey who often wandered around the cradle of the couple’s newborn son. One day, however, the unthinkable happened: the animal caught the baby up, went out the window and climbed to the top of the tower. Panic broke out immediately. The desperate father went out into the street, among the screaming crowd, and gave his prayers to the Madonna, begging her to save the baby. Legend has it that at that point the monkey meekly came down bringing the child back home.

The crowd gathered hail as a miracle and the father from that day, as a testimony of the grace received, wanted a lamp to burn perpetually on top of the tower in front of a statue of the Virgin. It seems that a clause binds each future owner to keep the old vow and that in the sales contract it is clearly indicated how the extinguishment of that flame might turn the present owner out of the palace. Nobody knows what happened to the pet monkey but since then, in Rome, the building has become known to all as the “Tower of the Monkey”.

The tower is visible from the outside; the inside cannot be visited.