On the Palatine hill, the water of the Fountain with a Peltae motif is flowing again | Turismo Roma
Skip to main content

On the Palatine hill, the water of the Fountain with a Peltae motif is flowing again It enriched the lower courtyard of the Domus Augustana, the private sector of the huge imperial palace built by Emperor Domitian on the Palatine, brightening the walks of the imperial court between the Palatine Stadium and the private rooms overlooking the immense valley of the Circus Maximus: after 2,000 years, water is flowing again inside the monumental fountain decorated with the motif of four opposing “peltae”, whose name recalls the shape of the little shields carried by the Amazons.

“Instar aquae tempus”, “Time flows incessantly like water”, is the Latin motto associated with the intervention, a green installation with which the Parco archeologico del Colosseo continues its project of reactivating all its ancient and modern fountains. Full respect and care for the ancient structure are accompanied by attention to environmental sustainability: the new basin is made of steel but it is totally removable, while the hydraulic system – which is housed next to an ancient underground channel – recirculates water according to a water saving policy.

At the four corners of the fountain there are aniconic metal statues that are inspired by the Roman copy of the original bronze statue of the Wounded Amazon depicted with the “pelta” at her feet. From here, scented clouds diffuse fragrances that alternate according to seasonal rhythms or linked to archaic festivities: rose, pomegranate, jasmine, cinnamon, formerly used for religious or cosmetic purposes. The fountain can be admired by the upper level of the Domus Augustana or through a guided tour. 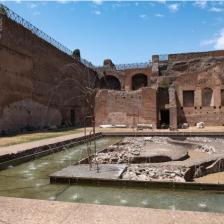