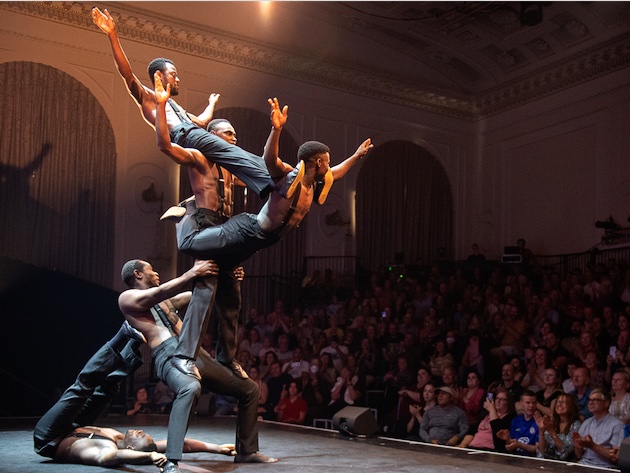 The fantastic acrobatic theater show of the Black Blues Brothers at the Olympic Theater finally arrives in Rome; inspired by the cult movie by John Landis, it skilfully mixes contemporary circus and musical comedy. The show, which recorded more than 700 dates all over the world, exceeding 300,000 spectators among many sold out and standing ovations, immediately proved to be an extraordinary international success.

The show is set in a refined Cotton Club style venue where a waiter pursues his dream of becoming one of the Blues Brothers, when suddenly two acrobats dressed in the unmistakable John Belushi and Dan Aykroyd suit appear, thanks to which he can see realized his aspirations: following the antics of a vintage radio that broadcasts rhythm'n'blues music, the barman and all the staff are transformed as if by magic into equilibrists, flag-wavers, acrobats and dancers with fire.

Each object on the scene becomes a tool for incredible acrobatics on the captivating notes of the soundtrack of the John Landis film for the five Kenyan artists who every night enchant the audience with their human pyramids, limbo with fire, acrobatic jumps with the rope and in circles, and again with funny gags and dance challenges.

In short, a breathtaking show from which one cannot help but be involved.