Money & Soldiers of the theatrical group Puppet in Music 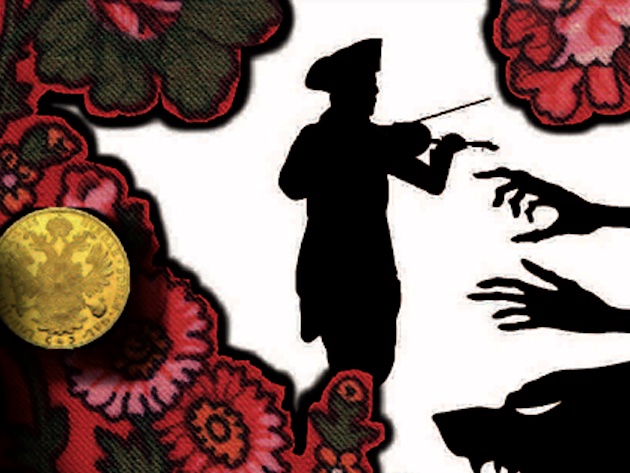 Freely inspired from the libretto by Charles-Ferdinand Ramuz, from the fairy tales of the Russian writer Aleksandr Nikolaevič Afanas'ev and from the Histoire Du Soldat by Igor Stravinsky, the text of this show is light and playful and leaves room for fantastic and fairytale elements, funny and grotesque.

The story tells of a soldier who, returning home after a long war, is happy because he can hug his girlfriend, parents and friends again. His backpack is very light, because he has little: the portrait of his beloved, the handkerchief embroidered by his mother and a slightly out of tune violin. But on his way he meets a strange traveler who, with the mirage of wealth and perhaps even with a spell, try to take him away from his little world of simple affections. At this point, however, an even more powerful spell, that of his violin, which represents the voice of the purity of the heart, makes him awaken, restoring his freedom. On stage, masked actors alternate, large bunraku puppets from Japanese theater, silhouettes, puppets, shadows, weaving a continuous dialogue with the musicians. Music is indeed a very important element of this show. The instrumental ensemble, much more streamlined than the original Stravinsky one, keeps the violin alongside a versatile use of the electronic keyboard and percussion instruments. The original themes of the great Russian composer are used with greater lightness and thematically associated with the characters of the story, while maintaining the fundamental characteristics of the original dances (tango, ragtime, paso doble, waltz).

The show is directed by Stefano Moretti, text by Paola Campanini, transcription and musical adaptation by Roberta Vacca.

Photo credits: courtesy of Concerts in the Park official site