The Roman Pangiallo, the icing on the cake 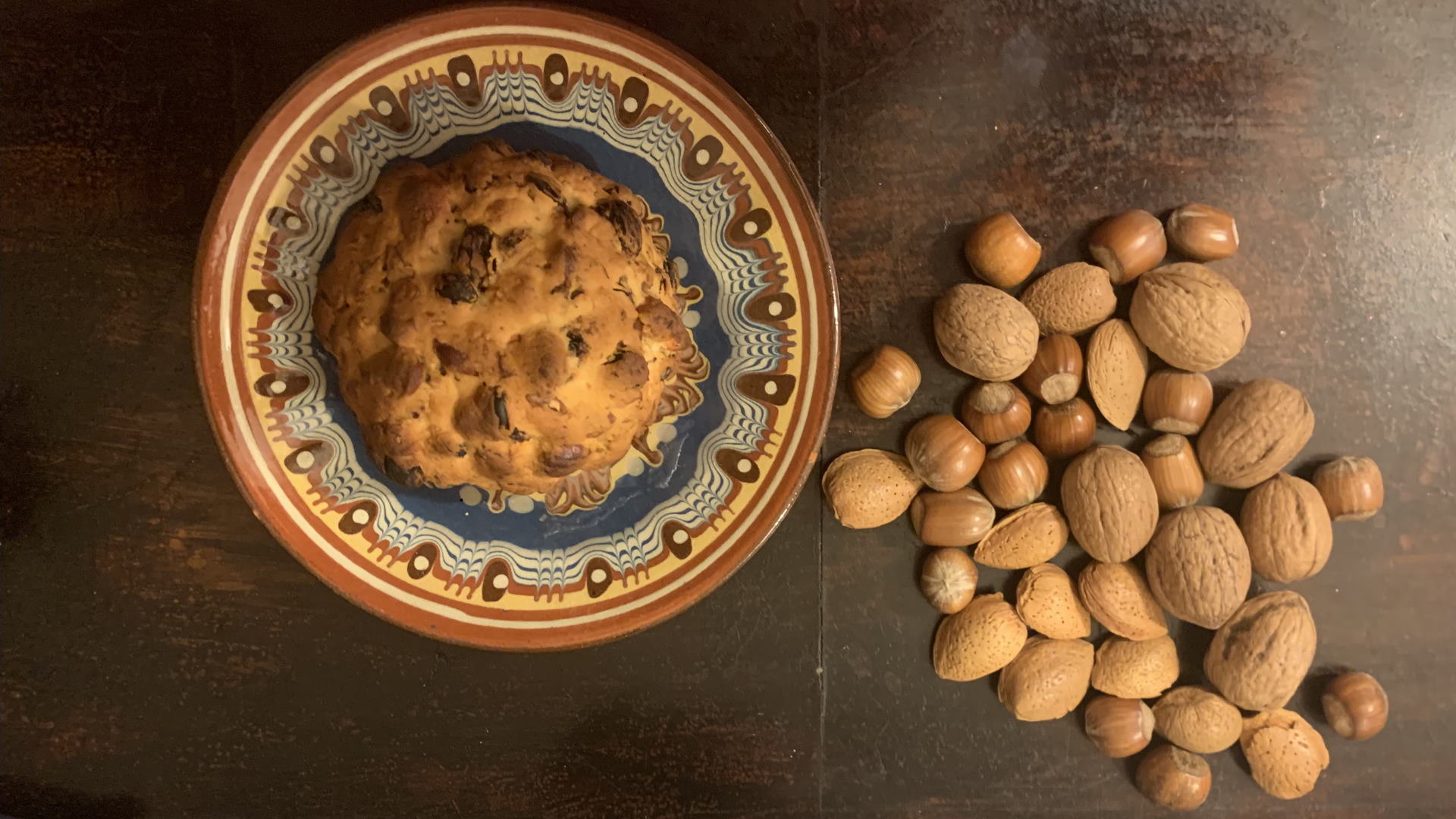 It is not so easy to meet real Romans: there will always be at least one distant relative born in another Italian region or even in another country. This is not the case with the Pangiallo, however. Far from being one of those imported recipes that where adopted by the city cuisine, it is really “Roman of Rome”, and for much longer than the proverbial seven generations. To discover its origins, one has to go back to Imperial Rome and read the “De re coquinaria”, the collection of recipes by the famous gastronome Apicius. Who, in the chapter dedicated to desserts to be “easily made at home”, wrote the following: “Mix pure wine, raisins and rue in the peppery honey. Combine these ingredients with pine nuts, walnuts and barley flour. Add the walnuts collected in the city of Avella, toasted and chopped, then serve”.

For people unfamiliar with Pangiallo, this “yellow bread” is a sweet extravaganza of honey and dried fruits, with a peculiar yellow glaze. A golden cake with a round shape just like the sun, to be given as a wish for the return of long sunny days. Leaving aside for a minute its tasty richness and enveloping sweetness, ancient legends and propitiatory rites boosted its lasting success: ancient Romans made and gave it as a gift to family and friends on the “Dies Natalis Solis Invicti”, the birthday of the Unconquered Sun, a pagan festival dedicated to the Sun god which was instituted by emperor Aurelian and celebrated on 25 December, that is a few days after the winter solstice –  the day with the longest night of the year, after which the hours of light gradually return to lengthen. The festival then celebrated the rebirth of the new sun and the outer crust of the cake brought an intense light into the house that symbolized hope.

Not only Panettone and Pandoro

Time passed but the tradition continued. Indeed, as Christianity spread across the former Roman Empire, Pangiallo became the prince of Rome’s Christmas cakes. In the Middle Ages, it was among the gifts that peasant wives gave to notables; at the beginning of the 20th century, it was to be found on all Christmas kitchen tables together with vermicelli pasta with anchovies, marinated eel, salmon, fried Romanesco broccoli and nougat, according to what Roman poet and anthropologist Giggi Zanazzo wrote in his book “Uses, customs and prejudices of the people of Rome”. A custom extended to all social classes even if, to reduce costs, some housewives used plum and apricot kernels, appropriately dried and preserved, instead of the traditional dried fruit combined with honey and candied citron. In more recent years, Pangiallo has inevitably lost positions in the collective imagination as compared with more diffused festive treats such as Pandoro and Panettone, yet it can still be found in many artisanal bakeries and pastry shops of the city around the yuletide period.

A show of riches with many variations

As often happens with recipes, in its millennial history Pangiallo has undergone various transformation. Variations might be dictated by taste and are sometimes linked to local & family traditions: some recipes include, for example, chocolate or cocoa, Bronte pistachios, cinnamon, pine nuts and even dried figs. Alongside more common ingredients, fresh ground pepper is used in the Pangiallo made in Viterbo, probably due to a contamination of flavors with the famous Umbrian Panpepato. There is no certainty also as regards the characteristic yellow outer crust: some claim that the spices contained in the dough are sufficient, some cover it with a layer of egg batter before cooking it and some do add water and saffron. What is certain is that you will always be conquered by its extraordinary flavor.

Ingredients
• 1 of Muscat of Alexandria raisins (or Sultana)
• 350 g candied orange or citron rind
• 200 g flour
• 200 g pine nuts
• 200 g almonds (peeled and chopped)
• 20 g baker’s yeast
• Powdered spices (cloves, cinnamon, nutmeg)
• 4 tsp extra virgin olive oil
• A few teaspoons of warm water
• 1 tsp sugar
• 1 tsp flour
Preparation
Combine flour, yeast, and a little warm water and mix into soft dough. Add candied orange (or citron) rind, almonds, spices, oil, and raisins and mix until dough is uniform. Work the dough into a dome shape and let stand overnight in a warm dry place. To coat the top of the Pangiallo, prepare a thick glaze with a spoonful of flour, a little oil, the same spices used in the dough, and sugar. When the dough has risen, spread glaze on top with a spatula. Preheat oven to 190° C and bake Pangiallo until it darkens up.