Panzanella, the taste of tradition 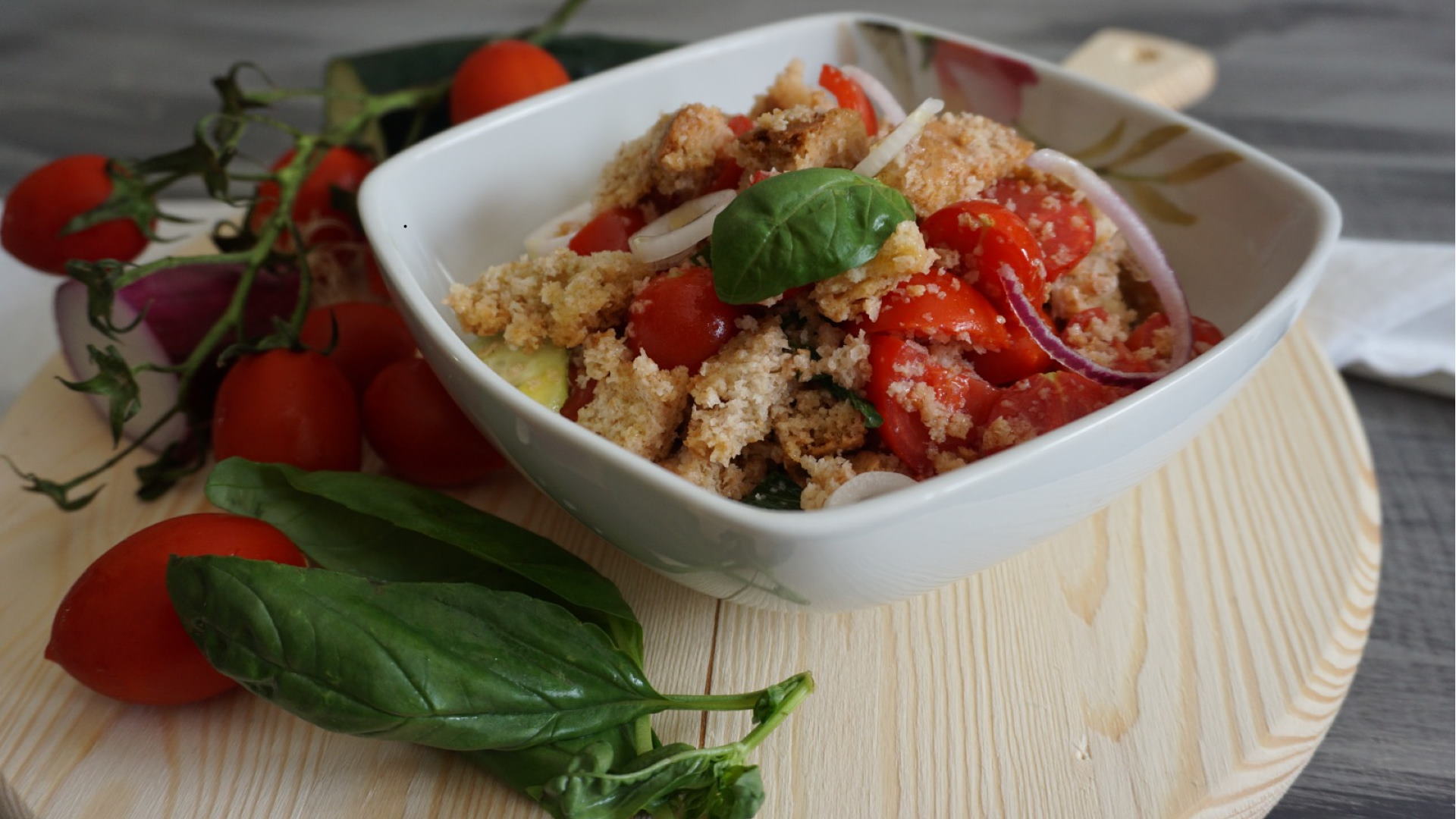 Fresh, light and tasty, this dish is so loved that it has its own celebration in verse. We are talking about panzanella, the summer queen of Roman cuisine, and this is how actor, director, screenwriter and Roman comic genius Aldo Fabrizi describes it in Roman dialect: “E che ce vo’ pe’ fa’ la panzanella? Nun è ch’er condimento sia un segreto, oppure è stabbilito da un decreto, però la qualità dev’esse quella. In primise: acqua fresca de cannella, in secondise: ojo d’uliveto, e come terzo: quer divino aceto che fa veni’ ‘a febbre magnerella. Pagnotta paesana un po’ intostata, cotta all’antica, co’ la crosta scura, bagnata fino a che nun s’è ammollata. In più, pe’ un boccone da signori, abbasta rifini’ la svojatura co’ basilico, pepe e pommidori”.  (What does it take to make a panzanella? The dressing is not a secret nor it is established by a decree, but the quality must be that. First: fresh water, secondly: olive oil, and thirdly: that divine vinegar that makes you droll. A little toasted peasant loaf, cooked in the old style, with a dark crust, wet until it is soaked. For a gourmet delight, simply add basil, pepper and tomatoes). A proof that it will please the most demanding palates? It is said that in 1865 it was offered by Baron Bettino Ricasoli to King Victor Emmanuel II, when the king visited the Castle of Brolio.

The ingredients of success: few, simple and poor

A poor man’s lunch rooted in peasant tradition, panzanella uses leftovers and reinvents them. Some says it was developed out of the custom of peasants to mix stale bread with the vegetables available from time to time, other argues that it was born on board vessels when sailors used to moisten the bread with sea water. What is certain is that it is an ancient recipe – originally without tomatoes that became mainstream long after the discovery of the Americas – and perhaps has a famous ancestor: that “pan lavato” or  “washed bread” mentioned by Boccaccio in one of the stories of his Decameron. Lazio, Tuscany, Umbria and Marche still contend for its paternity, proposing different variants with typical ingredients that are often considered canonical, such as Tuscan red onion and cucumbers. But each version can be enriched with the imagination: as in the past, panzanella comes with recycled ingredients, that is by adding what you wish. And by finding the right combinations, it becomes an explosion of flavors, perfect on summer days but also as a winter aperitif.

As the Romans do

In Lazio – and in particular in Rome – panzanella is traditionally made in the simplest way: just stale bread, moistened until soggy, tomatoes and eventually a little onion, seasoned with extra virgin olive oil, salt, vinegar and some basil leaves. Usually the bread is chopped or crumbled even if in Rome it is more common to soak the crust without breaking it: the ingredients are therefore placed on the sliced bread, in a similar fashion to bruschetta. The debate on the “real recipe” also concerns spices and aromatic herbs: in addition to basil, in Florence, Perugia and Rome people sometimes add oregano, parsley, chives and Roman mint. As for the main ingredient, Tuscans claim you need their typical bread without salt but when in Rome do as the Romans do and try the Lariano or Genzano-style bread, two specialties of the Castelli Romani. If possible, pairing it all with a glass of still white wine.