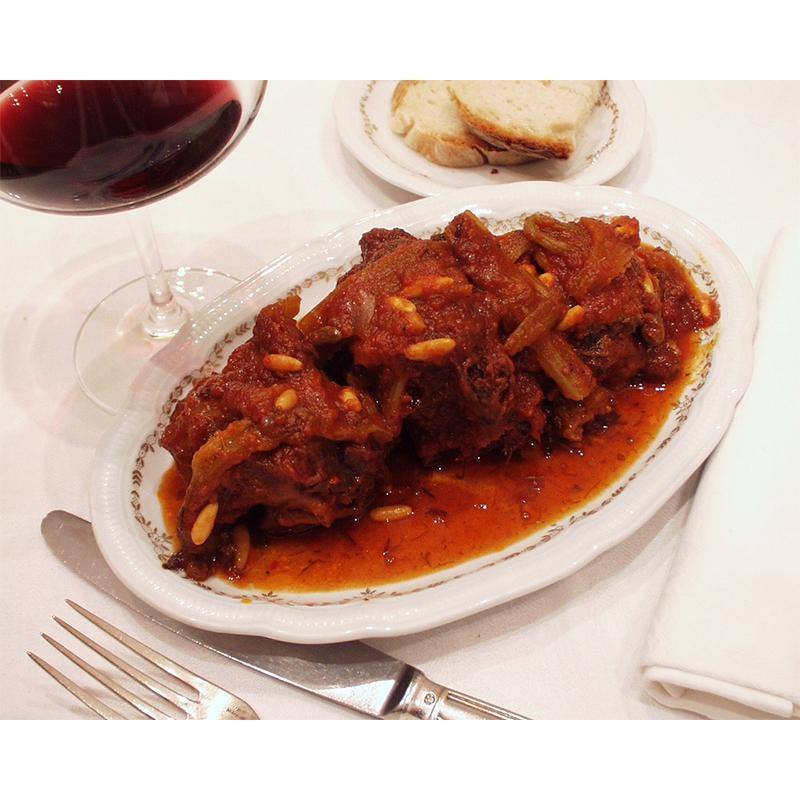 One of the absolute protagonists of typical Roman cuisine is "the fifth quarter", the offal of butchered animals, which gave birth to the tastiest recipes of local gastronomy.

In the past, only a small minority could afford the fine cuts of meat, and the fifth quarter was all that remained for the lower classes: a real art of getting by in the kitchen.

Among the most famous traditional dishes, there is the succulent Coda alla "vaccinara". Its name derives from the leather workers of the Rione Regola, on the left of the Tiber river, who had the custom of peeling, cutting and boiling the tail of the animal to eat it.

The offal-based Roman recipes, such as the tail, became a must with the inauguration of the Testaccio Slaughterhouse in 1890: the workers were partially paid with scraps of butchery, which became original dishes thanks to the creativity of the housewives and the cooks of the taverns located in the area.

The vaccinara tail is made up of oxtail, or veal tail served with vegetables. It is an appetizing second course, but also an ideal sauce for rigatoni!

There are two main versions, which differ in the final part of the preparation, and both have coexisted for decades in the trattorias of the city.

Here is one of the traditional recipes, as it was usually prepared in restaurants and trattorias, suggested by Gambero Rosso:

Divide the tail into pieces, cutting it exactly at the joint of the vertebrae, blanch it for about three-quarters of an hour in boiling salted water and drain it.

Prepare a mince with onion, celery, carrot, garlic and parsley. Heat the oil and lard in a large terracotta saucepan and gently fry the chopped vegetables.

When it starts to take on colour, add the tail and the cheek cut into pieces and continue the browning gently, turning the pieces of meat often, until they have taken colour.

At this point, wet with the wine and let it evaporate slowly. Season with salt and pepper and add the chopped tomatoes. Cover and continue cooking over low heat for about three hours.
During this time, occasionally turn the pieces of meat and, if necessary, add a few tablespoons of hot water. In the meantime, clean the celery by discarding the hardest ribs and removing the filaments from the others.

Cut it into pieces, scald it briefly in boiling salted water and add it to the tail when it is almost cooked and the sauce well thickened (after about two and a half hours). Soak the raisins in warm water, drain them and add them to the tail at the end of cooking. Also, add the pine nuts and melt the cocoa in the sauce.

Another quarter of an hour and the tail is ready: let it rest for five minutes and serve in the same cooking container.

The three hours of cooking time are indicative. They can vary, more or less depending on the age of the animal and therefore on the hardness of the meat. Keep in mind that in the end, the meat will have to be overcooked, detaching itself almost from the bone.