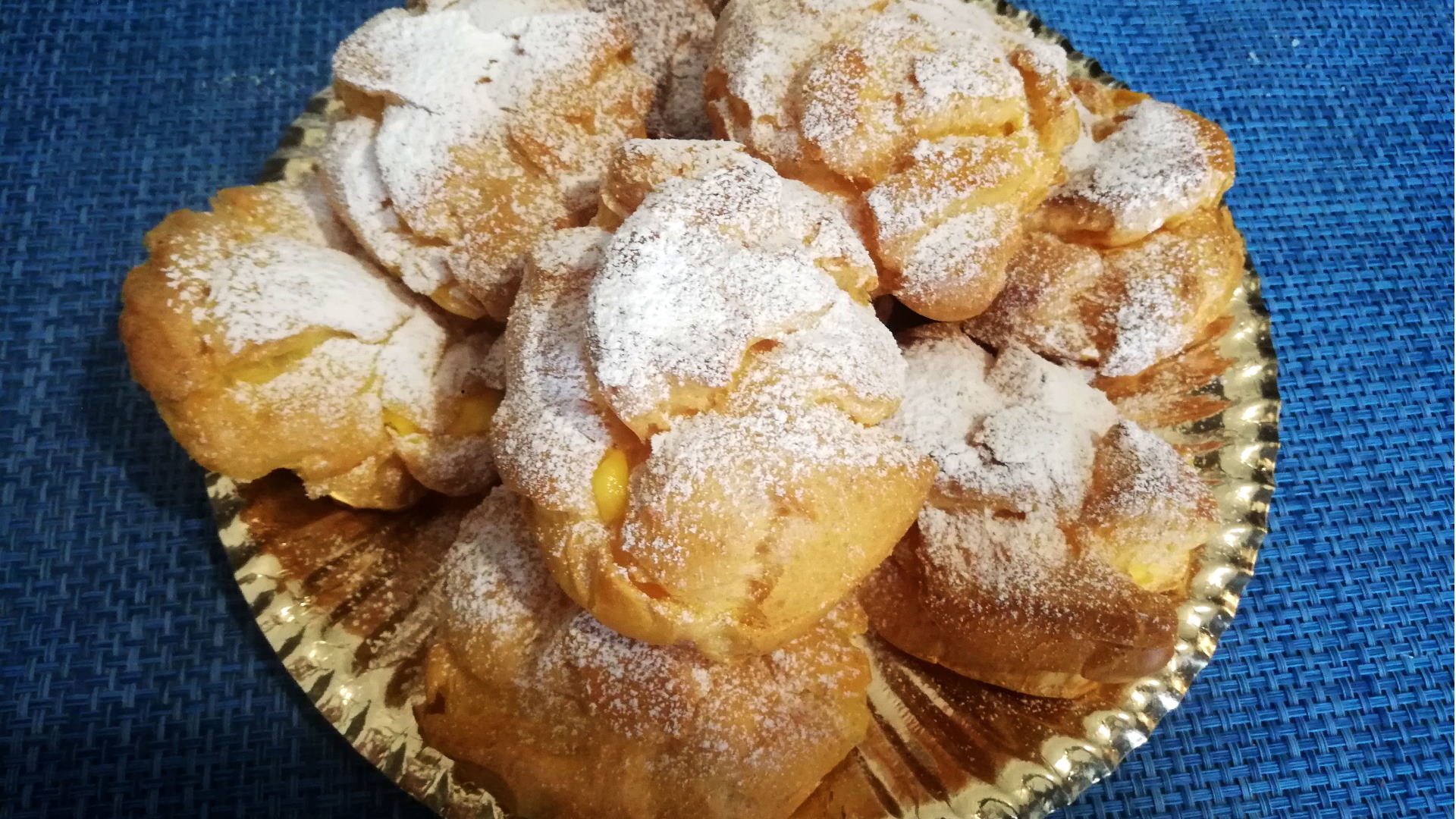 Delicious, filled with pastry cream and dusted with powdered sugar, a truly explosion of goodness both in the fried and baked version: a close relative of the Neapolitan Zeppole, St. Joseph’s Cream Puffs/ Bignè di San Giuseppe are a sweet Roman culinary tradition that can be enjoyed on 19 March and in the days before.

The feast of the saint

There are some saints easier to love: this is the case of St. Joseph, protector of the weakest, patron saint of carpenters, putative father of Jesus, a good and just man. Since the 15th century, the church has remembered him on 19 March (the day of his death, according to some traditions) and on this day most Catholic countries celebrate Father’s Day. In the Rome of the Popes, the feast of the saint was a highly anticipated event: since ancient times the Confraternity of Carpenters financed and organized the celebrations, which had their center in the church of San Giuseppe dei Falegnami in the Roman Forum.

But what is the connection between the saint and the cream puff? There are two traditional explanations. The first is directly linked to the history of the Holy Family: legend has it that after escaping from Egypt, St Joseph began preparing and selling fritters to protect his family and raise Jesus. A second hypothesis traces the Catholic feast back to the pagan traditions of ancient Rome, specifically to the propitiatory festivals in honor of Liber Pater and his wife Libera. The Liberalia were held on the occasion of the sixteenth year of a boy who became a man wearing the “toga virilis”: wine was offered in large quantities, accompanied by wheat fritters fried in boiling lard.

Be that as it may, alongside the solemn rites and processions, the undisputed protagonists of the traditional Roman celebrations were also street vendors offering fritters and cream puffs fried in large cauldrons. The entire city was filled with itinerant posts, accompanied by music, dances and dances. The clamor and atmosphere of the festival were handed down from poets and writers. Poet and anthropologist Giggi Zanazzo called it a “ffesta granne”, a big feast, and in 1950 Checco Durante wrote a prayer in Roman dialect to “San Giuseppe frittellaro”, the fritter maker saint, the nickname with which the saint became known in Rome. Today little remains of that great festival, with the exception of the celebrations still alive in the Trionfale district, a few steps from San Pietro, around the church of San Giuseppe al Trionfale. Luckily, the cream puffs are still the official sweets for Father’s Day: ​​you can find them in all the bakeries, bars and pastry shops in the capital but, if you want to prepare them at home, here below is the Gambero Rosso recipe.

Combine the water, butter and a pinch of salt in a steel pan. Bring to a boil, remove the pan from the heat and pour the flour at once, stirring vigorously with a wooden spoon, incorporating it into the liquid.
Put back on the heat and, continuing to stir, cook until the dough comes off the sides and bottom of the pan. Remove from the heat and let cool. Add the eggs to the dough, one at a time, stirring vigorously. In the end, it will have to be a solid and elastic dough. Bring abundant oil to 180 ° C. Using two wet spoons, let small spoonfuls of dough slip into the oil, a few at a time, so that they have space to swell and float. Drain them with a skimmer when they are of an intense gold colour, dry them repeatedly on paper towels and let them cool.

Boil the milk (less than half a glass) together with two lemons peels and a pinch of salt. Collect the egg yolks in a bowl and, with a wooden spoon, work them for a few minutes with the sugar and the sieved flour.
Dilute the mixture with the rest of the cold milk and drizzle in the hot milk without stopping stirring. Pour the cream into the milk casserole and put it back on the heat. Adjust the flame to half height and, stirring without interruption, cook the cream for a few minutes, until it has thickened. When cooked, discard the lemon peels and pour the cream into a bowl to cool it. While cooling, stir occasionally so that the skin does not form on the surface. Fill the beignets with the crème patissière, helping yourself with a pastry bag. Cover with icing sugar and serve.