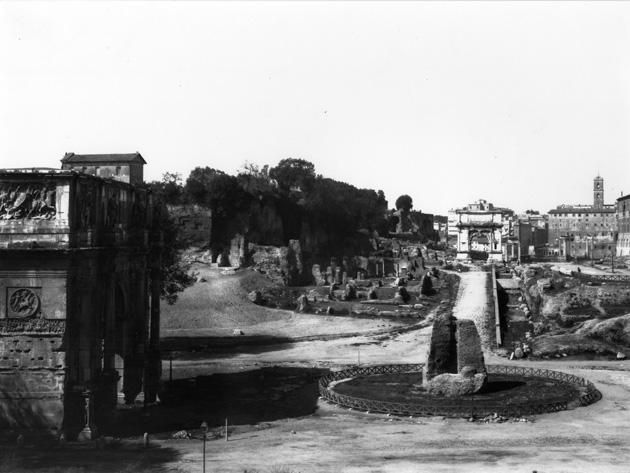 In front of the Arch of Constantine, the remains of an ancient fountain are still visible. We are talking about the Meta sudans, built at the end of the 1st century AD by the Flavian emperors, therefore contemporary to the construction of the Arch of Titus and the Colosseum.

The monumental structure derives its name from the conical shape that remembered a sort of column of the ancient Roman circus and from the fact that the water dripped like sweat.

The fountain remained in use until the 5th century AD when the laying of the Colosseum Valley began to obstruct the water outflow canals.The imposing ruin was then demolished in the 1930s to create via dei Trionfi.

It was possible to reconstruct its original appearance, thanks to the monetary representations, the photos of the late 19th century and the drawings made at the time of demolition. It was a fountain 18 meters high, with a base cylinder, covered with marble and perhaps divided into niches, with a conical upper element, surmounted by a flower or a sphere.

According to legend, the surviving gladiators went to the Meta to refresh and cleanse their wounds after the games in the nearby Colosseum. The structure was in a very important urban area, at one of the summits of the sacred border of the Romulean city, the crossroads of two streets connected to the triumphal route, and the meeting point of four Regions of the Augustan Rome.

In the same area, the emperor Augustus already built a smaller fountain, mentioned by the sources and found during recent archaeological excavations.