The Bunker of Villa Ada Savoia 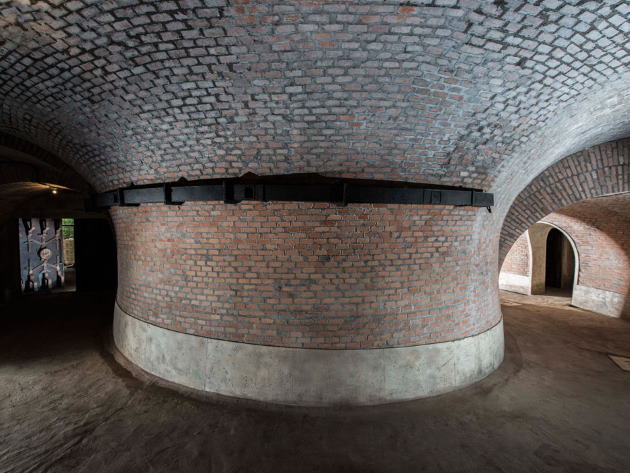 The Savoy air-raid shelter, surrounded by the thick vegetation of the large park of Villa Ada, opens for the first time to the public after being abandoned for 70 years. The royal bunker is now visitable, in all its historical charm, thanks to an important restoration activity promoted by the Capitoline Superintendence for Cultural Heritage and carried out by the cultural association Roma Sotterranea. The works have been possible, by means of a two-year agreement stipulated between the two subjects as a result of the outcome of a public call for tenders.

The works, which began in mid-October 2015, were coordinated by the head of the Association Fabio Ciccone under the guidance of restorer Roberta Tessari, with the technical and scientific supervision of the Superintendence officials. More than 3,000 hours were dedicated by the staff of Roma Sotterranea to the recovery activities, which consisted in the elimination of the numerous graffiti and murals, the recovery of the metal parts, the restoration of the electrical circuit and all the armoured doors (now again in perfect working conditions), the reconstruction of the bathrooms and, outside, the creation of an easy access road to the refuge. During the inauguration, following an agreement with A.S.I. (Automobilclub Storico Italiano), vintage cars belonging to that age will be exhibited while, from this summer, art exhibitions and theatre performances of historical re-enactment will take place inside the bunker.

The air-raid shelter, probably built around 1940-1942, when the fear of air raids on the capital began to become more realistic, was intended for the exclusive use of the Royal family. With an at least singular choice, the place where the bunker was built was located in a northerly direction in relation to the Royal Palace, at a distance of approximately 350 metres as the crow flies. The designers were able to exploit the change in altitude due to the presence of a hillock, the so-called Colle delle Cavalle Madri.

The bunker was therefore excavated inside the tufa rock bank of the hill, perhaps exploiting part of the existing quarry environments. Thus levelling the entrance with the rest of the structure, without having to walk up stairs or ramps. The main peculiarity of the bunker, thanks to this feature, was that it could be used to shelter cars inside it. In fact, the distance from the residence meant that it had to be reached not on foot, which was very risky during an air alert. A short trip by car, first heading north, leaving the stables on the right, and then descending westwards along a winding road, allowed you to get there in no more than 2-3 minutes. The structure shape, which develops totally underground for more than 200 square meters, is more or less circular. The access to the refuge was through a short double-curved tunnel which led to a massive double door, its driveway entrance. The two doors, still in place, weigh about 1,200 kg each and were made by pouring cement inside the 20 cm thick iron door. On the left an armoured door gave access to a first room, then through an anti-gas door to a following one, the real heart of the bunker: it was a high pressure chamber built following a German model, equipped with effective engined filters for the air purification and exchange, and an autonomous system that allowed, even in case of lack of electricity or motor failure, the functioning of the aeration and filtration system. This was possible thanks to a human propulsion system, through a sort of "bicycle" providing pedal-power energy. These systems were identified as "pedal-powered electric fans". The shelter is completed by 2 bathrooms, an ante-chamber and 2 service rooms.

In all the rooms, the care in the manufacturing and in the use of materials, and the evident references in some details to the rationalist architecture typical of the time are astonishing.

The bunker was equipped with a secondary escape route: 40 steps of the splendid travertine spiral staircase have to be climbed to reach a small cylindrical brick building with mushroom-shaped roof, located at the top of the hill. At its side is located a concrete slab structure; it works as a shield, to protect the perfectly camouflaged underground environments. Thanks to the thick surrounding vegetation of tall maritime pines, they contributed perfectly with their wide foliage to the purpose. For further camouflage, the shield was covered with tufa blocks, perhaps extracted during the construction of the refuge. The slabs were supported by slender brick walls, in which wide arches opened. In case of explosion, the walls would have collapsed, thus dampening the impact of the bombs and creating a buffer effect.

Gas protection was provided by rubber seals on all doors, including the large driveway door. On some doors the gaskets are still miraculously in place.

The visits are temporarily suspended.