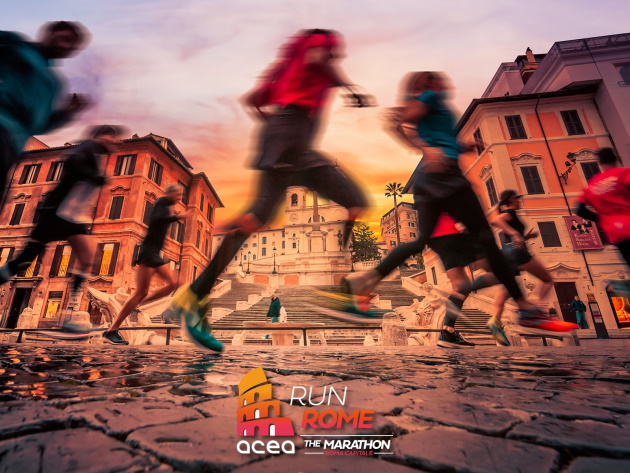 It is the time of the rebirth of Rome, of sport, of well-being, it is the time to conquer the city, to hear the footsteps that become music, to run while the city gently awakens.

After the postponement of last March 2020, following the Covid19 pandemic, Run Rome The Marathon Alba Edition Special Race arrives with the athletes lined up at the start still in the dark, waiting for the first lights of the day.

Acea Run Rome The Marathon is the first major international marathon to resume activities with many projects that involve the whole city, including the Acea Run4Rome solidarity relay and the Stracittadina Fun Race in which you can participate both from all over Italy and from abroad.

Run Rome The Marathon Alba Edition Special Race starts from the Imperial Fora at 6.45 am to run through history. Over thirty monuments and historic cultural sites are involved in the event, and runners can admire them during the 42km of the competition, the only race in the world to boast this heritage and record.

Km 0 is, per tradition, from the Imperial Fora, in the heart of the city in imperial times. Then the Altare della Patria, a monument that totally changed the Renaissance layout of Piazza Venezia, the Campidoglio, and the Teatro Marcello. And then again the Circus Maximus, the majestic Pyramid of Cestius, Via della Conciliazione, the embrace of the Colonnade of St. Peter, and the Basilica with its imposing beauty. It continues with Ponte Cavour, the Lungotevere, the places that once belonged to the 1960 Olympic Village, Piazzale dell’Acqua Acetosa, Via dei Campi Sportivi, Viale dell’Agonistica. Km 30 meets the mosque towards north Rome, near Monte Antenne, and then returns to the finish line. Via del Corso, Piazza del Popolo, and Piazza di Spagna, one of the many symbolic places of Rome which, immortalized in Roman Holidays, launched the myth of the Eternal City. The last kilometers run along Piazza Navona, the "good" living room of the city, to return in the direction of Piazza Venezia and Via dei Fori Imperiali. The finish line is in front of the Colosseum, the symbol of Rome and the most famous monument in the world.

Three main cultural initiatives are dedicated to marathon runners and their companions:
ART CARD - The card provides free admission to the Museums of the Civic Museums System of Rome Capitale for marathon runners and their companions for a whole week and precisely on the days between 16 and 23 September.
ARCHEORUNNING - The project by Isabella Calidonna, creator of Archeorunning, entices more people to practice sports and at the same time get to know unusual places in Rome. Participants and their families in the days before or after the race can experience the city making gentle movement in running tours or walking tours mode.
Art historian, FIDAL technician, Coni physical trainer, licensed tour guide are just some of the peculiarities of the project founder, which guarantee an experience studied in all aspects. The proposal consists of different experiences: running tours, fit walking tours, walking tours, or ArcheoTrekkingTour, aimed at all age groups, sure of the interest that art and culture can offer.
APPIA ANTICA - Among the proposals to enrich the experience offered to participants in the Acea Run Rome The Marathon there is also the Archaeological Park and the Appia Antica Regional Park: a special card allows athletes registered in the marathon, relay, and stracittadina, free admission to all the sites and archaeological areas of the Park for the period between 17 and 26 September 2021.

Consult the official references for all updates.

Registration must be carried out on-line, following the instructions on the website
www.runromethemarathon.com.
The cost of the on-line registration service is not included in the fees indicated. It is possible to register individually or as a company/group. Entries will only be considered valid after receipt of proof of payment.

Registrations will be closed on 10 September 2021. Entries received after this deadline will not be accepted. The organisation reserves the right to close entries early or to accept entries after the closing date at its sole discretion. In any case, no entries will be accepted on the day of the event.

It will be possible to check the status of your entry by following the instructions provided on the website www.runromethemarathon.com.